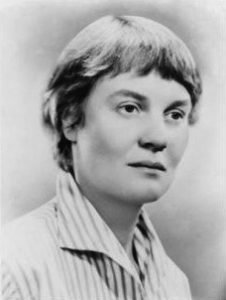 [/frame]Dame Iris Murdoch (1919-1999) was a serious student of Platonic idealism, in addition to being a highly successful novelist. Her exploits as scholar and philosopher – she was fellow at St. Anne’s College, Oxford – add a resonance to her work that gives critics plenty to speculate about, but the most interesting thing for me, about Murdoch, is her cool-headed skill as a storyteller. Over the course of a long writing career, she produced more than twenty engrossing tales. Her novel, The Sea, The Sea is a prime example – and a good place to start, if one has not read Murdoch before. Winner of the 1978 Booker Prize, it’s Murdoch at the height of her power.

On a certain level, we are all storytellers – even if, for most of us, the story we tell is our comprehension, our construction, our fantasy of our own lives. In The Sea, The Sea, Murdoch takes on that human impulse. Her narrator is indeed writing his own life. Or trying to. His life interferes with his story. George Arrowby is not a sympathetic character, but that is almost beside the point. From his own point of view, he is trying hard and his determination to get a grip on his story, to make it come out the way he wants, draws the reader in and his telling becomes seductive. The sea, next to which he has chosen to live and tell becomes a major character in the narrative – as place, as actor, as symbol.

“The sea! The sea! (Thalatta! Thalatta!)” the Greek historian Xenophon tells us, in his Anabasis, was the cry of wandering Greek soldiers when they saw the Black Sea from Mount Theches in Trebizond in 401 B.C. For them it meant salvation, the renewal of their story. In the beginning, that’s how the sea stands for George Arrowby, a potent promise of fulfillment that he feels owed. In the end, it proves a more complicated symbol. The tale is full of is a mix of tragedy, humor and irony. Its ending is startling and can’t be faulted. 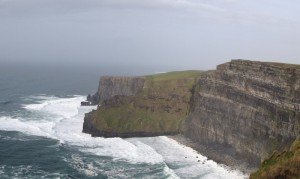 [/frame]At this point, in considering Iris Murdoch, there is, of course, another story that stands ever in the background. That is the story of Iris Murdoch, successful writer eventually felled by Alzheimer’s disease. Most know of it through the memoir and later movie, Iris. According to her biographer-husband John Bayley, there was a deep irony in Murdoch’s own life. Despite her mother’s having succumbed to this dreaded disease, she never expected it to be the end of her life’s story. If she had some private apprehension of the possibility we are not to know, but in almost all of her novels there is in her characters a determined reluctance to accept contradiction to their self-appraisal.

We can’t know if she imagined herself, like George Arrowby, to be standing at the brink of an ocean of possibility (both the good and the bad kind), but speculation is almost unavoidable. That doesn’t detract from or devalue the work she did – in what was, after all, a long and productive life. It only adds another resonance, a “what you don’t see,” all its own. We don’t need to view a writer’s work in terms of the writer’s own story, but when we can’t avoid knowing something, it becomes a traveler with us in our exploration of the work. If we let it be a quiet companion, I think it will let us still appreciate – in fact, revel in – this truly original work.

Practically all of Iris Murdoch’s novels are well worth looking into. My own favorites, in addition to The Sea, The Sea, are Bruno’s Dream and A Severed Head. All, and many others, are still available on Amazon.com, or probably your local library or bookseller. It’s a trip worth taking.