Here’s what I’m thinking:
Why does a duck need an ark?
What’s a flood to a duck?

The teacher says I ask
too many questions.
I raise my hand again, thinking

if we didn’t have teachers
would we ever have to
raise our hands?

I won’t eat tomatoes.
The slices in a white bowl
are like pieces of someone,

Saint Somebody
of the Better Boys.
I might go out and play

David and Goliath
this afternoon.
Sometimes I wonder

what it would be like
to be the giant.
Everybody wants to be the underdog

with his slingshot, but I’m thinking:
imagine, hands bigger than a hymnal.
People could feel you walking.

Oh, and a boat that big
wouldn’t float would it?
And wouldn’t they eat each other?

The Passion of Bursars

The room is painted a pale green,
gray filing cabinets,
a moon-faced clock with arms like spears
and in the back of a desk drawer
one of those thimble-shaped
simple rubber devices
that fit the finger tip
and was used for turning pages
of onion-skin tax receipts.
It must have a clerkish name
but the body can’t help but think,
nipple, nipple nipple. 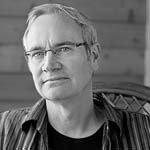 Michael Chitwood is a free-lance writer and teaches at the University of North Carolina – Chapel Hill. His poetry and fiction have appeared in The Atlantic Monthly, Poetry, The New Republic, Threepenny Review, and numerous other journals. Ohio Review published two books of his poetry – Salt Works (1992) and Whet (1995). The Weave Room was published by The University of Chicago Press in the Phoenix Poets series (1998). His essay collection, Hitting Below the Bible Belt, was published by Down Home Press (1998). Gospel Road Going, a collection of poems about his native Appalachia, was published in 2002 and was awarded the 2003 Roanoke-Chowan Prize for Poetry. His poetry From Whence was released in March 2007 from Louisiana State University Press. Tupelo Press published his book Spill in October 2007. Spill was named as a finalist for ForeWord magazine’s poetry book of the year and won the 2008 Roanoke-Chowan Prize. His most recent collection Poor-Mouth Jubilee (Tupelo Press, 2010) was also named a ForeWord finalist.