This year, Poetry Magazine has been celebrating its one-hundredth birthday. It’s not unheard of for a magazine to last a hundred years, even in this country where things get old fast, but it’s still unusual enough to note. And for another reason: not only has Poetry been celebrating its birthday all year long by publishing notable poets from its past alongside the contemporary – it also has published an anthology.

The ad copy that came with the notice quotes T.S. Eliot: “There is nothing like it anywhere else. Poetry has had imitators, but has so far survived them all. It is an American Institution.” Of course there may be some debate about whether it’s a useful compliment to be called an institution, but there you go. If T. S. Eliot liked it … Well, T. S. Eliot was last alive in 1965. Poetry magazine has now outlived him by sixty years and more and must surely be regarded as an institution. Is it still a useful institution?

Poetry Magazine, like The New Yorker, that other incomparable institution, is one of those magazines even its most faithful readers love to hate. Some think it’s too stodgy. Some think it publishes too much that’s experimental, too political, not political enough. And so on. The New Yorker gets people hot under the collar with its oblique fiction and its convoluted cartoons. Or is it the other way around? I think Poetry gets people hot by not publishing just what they would like to see. Given the wild diversity of poetic taste currently reigning in this country, what would be surprising would be if Poetry did succeed in pleasing everybody.

I like the magazine (and in fact, subscribe) because there’s always at least one poem that surprises and many that evoke admiration, if not comfort – and why should be poetry be comforting anyway? But principally because I often find new poets and new ways of thinking about poetry. It’s where I found a review of the work of Michael Donaghy, for example. That might have been enough all by itself to keep me coming back, but there’s always something interesting. . 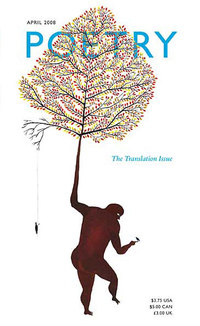 After a certain amount of diligent search (thank you, Google) I found the website for The Open Door, 100 poems, 100 years at the University of Chicago Press. The title of the anthology is based on a statement by Harriet Monroe, Poetry’s first publisher : “May the great poet we are looking for never find it shut, or half-shut, against his ample genius!” The ad copy goes on to promise “not necessarily the most familiar,” but a collection which will echo the century. The list of poems included then begins with Pound’s “A Station at the Metro”, which can hardly be described as not familiar, but there are many names I’m happy to see here: Kay Ryan and Seamus Heaney and George Starbuck and Hart Crane, side by side with Alice Fulton, Gary Snyder, Adrienne Rich, W.S. DiPiero. It doesn’t look like a stodgy anthology. It looks a lot like Poetry Magazine, in fact. Some people are gonna love it; some people, not so much.