Because you cling like cigarette smoke, thin and acrid, in the brim of my hat, as if
you know God lives on the addiction of our breath.

When the shadows finish wallpapering the bedroom, and the crows flock east
with the traffic, is when.

How can I watch, in peace, the city bathe behind the sheer plastic shower curtain
of the rain? My eyes towel off a nakedness not ours.

4
Because it’s late, and we know it will all expire, and I’ve programmed the wind,
an oscillating fan, to scatter us, like loiterers, from the world. Forgive me. I love
so much.

The rising shrill of the fire engine its single red strobe like a centrifuge
spins the blood in our veins.
Traffic is parted and a businesswoman drops her cellphone
cupping her hands into earmuffs.
The one left on the other end of the line now flush
with the ground listens to the street.

Think of Moses at Sinai hidden and trembling in the cleft
the Lord’s glory passing by.
Think of Odysseus tied to the mast unplugged his ship sailing on
basking in the siren song.
For a moment you become the event of mountains seas a city
both its passage and its wake.

The pigeons erupt in a swirl of applause.

The West End, Vancouver, BC 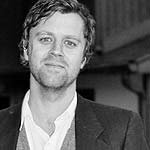 Stephen Hitchcock lives in Charlottesville, VA, where he works as the Director and Chaplain of The Haven. The Haven is a day shelter and social resource center, serving the homeless and very poor of central Virginia.