Sleep bears me to the farmhouse slanted on a steep hill, commanding the highway below. Yellow clapboard and fieldstone constructed after the Civil War, the first floor a single room of stone, fireplace centering it. I warm my hands at the stone hearth—a rosemary bush flames silver-blue tongues, new stems uncoiling as fast as they burn. Through pungent smoke shades appear: my children young again, interrupted in their play, John, my professor husband with his eternal scatter of books, friends, just passing through and the ghost we all tolerated. A woman we agreed, wearing white we couldn’t see, who watched as we slept, stared while we went about our tasks, our necks tingling. She continued to rummage the attic when I became the last one there…

Oh yes, I felt an affinity for this house, its twelve acres of trees, a giant rock beyond the garden where the children played. Captains Ahab gazing from the stone they called “whale.” Summers a wealth of vegetables pushing from the dark earth cultivated for decades. The wood stack where I stood winter nights, eyes filling with stars, a lone dog barking in the distance. Coming inside, stew bubbling on the stove, children at their homework, John at his books.

Placing a log on the fire I touch the rock fitted into the random width pine floor where an ember had burned a hole through to the earthen basement. I pick up the stone, polished by years of footsteps, hold it in my palm, gaze into the darkness below.

I wondered about the woman who planted the iris bed, rhizomes so tangled only one bud could shoot up at the time, unfold silk petals and slowly wither—the random joy of a different color each day. A plethora of peony bushes we freed from encroaching vine. They cast heavy white heads I cut to fill a glass aquamarine bowl to place on the dining room table.

Who gathered here for dinners past? The surrounding hills providing early sunset, trees silhouetted against the sky. Once John and I lingered after our meal, watched foxes digging at dusk for voles we’d unknowingly enticed with tender roots of parsley, lavender, other herbs we’d planted in our formal garden. Paws scratching the loam, a quick toss of the head and another vole down the throat of the animals who barked at night below sloping bushes covering their den.

Twelve acres of creation, our paradise. Mockingbirds filling with the melodies of other birds each morning, singing them back to us as we rocked on the front porch late afternoons. Quail babies hurrying single file behind an adult crossing the grass. The gentle deer weaving through trees to a salt lick I’d placed for them. Each autumn an unseen bear scratched a pine edging the property, seeking grubs or perhaps marking his territory. I imagined him asleep in a hollow tree once it grew cold. Tree frogs, feet suckered onto the outer glass of living room windows, secret singers of the night staring in as we relaxed to opera—most often The Magic Flute or Verdi’s Otello. Once a luna moth with its false eyes hung there for hours.

Terrified of snakes I made peace with the black one who lived between the fieldstone outer wall and the inner plank one. It sunned on what I called its “front porch”—a broken rock creating access to the outdoors. Elderly neighbors claimed our land was the only part of the mountain free of copperheads, that black snakes, harmless, had been there for their lifetimes, killing off the young beautifully patterned but poisonous copperheads.

After the children grew and left home, John fell ill. A family from the nearby church (built of the same rough stone as our home) who kept the cemetery mown and clipped took over our lawn. Lurching up the steep drive in a battered station wagon, several adults and children poured out, removing lawnmowers from the following pick-up. Throwing a blanket on the lawn for infant twins, the work began. Looking out of John’s sickroom I felt as though we were living in a Chekhovian tale.

Later one of the twins died, I helped fund the funeral through our priest due to their poverty. By that time John lay in the same churchyard where the child was buried.

When they wheeled John out on a gurney, down the broken brick sidewalk to the waiting hearse, whittled face bared to the sun he had not felt for months, I stood alone. The house now an empty stage I clung to, always expecting his footstep on the sill.

The day he was buried I paced each room. In each one, just as I was overcome by a spasm of grief, a yellow butterfly thumped against the window screen as if to distract me. I decided to take a walk down an old logging road, every few yards there would appear a yellow butterfly to circle me and disappear. Another and another until I felt the numinous comfort of John. We’d made a promise that he would let me know he was all right—if that were possible.

The ghost became more intrusive as I lived alone, flickering lights as I climbed the stair, staring until my neck burned when I sat on the exercise bike looking out on the wood. Once she entered my room—new territory for her. I pulled the cover over my head, demanded she leave, never enter my bedroom again. The scatter of objects in the attic I’d always scolded the children for, continued.

A hard winter of writing poetry, bringing in logs wearing John’s red jacket, stamping through bare frozen woods quoting Rilke—“Rose, oh pure contradiction, joy of being no-one’s sleep under so many lids.” That spring, waking to breath, an owl’s call, the possibilities of dawn became space for change, new creation. I learned the living cannot remain with their dead. Releasing what I’d never been so utterly owned by, I sold the house.

Now in sleep or memory I look over my shoulder, the room clears, silent but for a scrabble of sparrows under the eaves, broken shells from last year’s fledglings white against dark earth below—nesting again, twig by twig, always arriving, always taking wing. 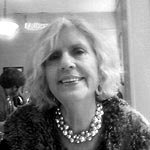 Judy Longley of Charlottesville, Virginia, has published four books of poetry. Her poems have appeared in Poetry, Paris Review, Virginia Quarterly Review, among others. She served as poetry editor for Iris: A Journal About Women, (University of Virginia), Tough Times Companion (Virginia Foundation for the Humanities) and is a prior Streetlight editor.

An Interview with Judy Longley

I was very touched by this piece of memoir. At the risk of sounding like an interviewer on the News at 6, I want to ask: how did it feel to write it?

I felt excited, almost exalted. It was a numinous experience as though I were recovering a piece of my soul. It seemed to unfold in a series of brightly lit scenes, the words flowing with the visual slide show.

Many reading this piece will recognize you as a poet whose work has appeared in this magazine. Can you talk a little about how writing the memoir is different from writing poetry? Or how like it?

When writing a poem I don’t know the ending. Writing this piece was like following a well-known path. I knew John’s death would be the denouement but wanted it not to overshadow happier days. Being about as right-brained as one can get I’ve enjoyed the freedom poetry offers, not having to tie up in a neat package, allowing the reader to make her own connections. I tried this technique and found it possible to allow images and landscape or environment to express the emotional content as I do in poetry. I tried not to think about “rules” of writing an essay knowing it would make a delightful challenge into a chore.

One of the things that struck me in reading this piece was your appreciation for the fullness of the life lived in that place. Do you think such appreciation is available to all of us? And how would you suggest finding it?

Wow! Big question! I want to say big words like intuition, having a spiritual and mystical connection with nature, keeping an open mind about this world, the ambiguity of being mortal. How the floor can drop from us at any time. Words like love, God, compassion. We all have a spiritual path, it’s a matter of honoring it I believe.

There is sadness in this piece, of course, but also great joy. I won’t ask which overbalanced—one can never ask that—but would you like to speak about how that balance works for you?

On learning the finality of John’s illness my second thought was gratitude for the joy we had shared. It seemed a negation of our happiness to feel bitter. I felt an obligation to bear this loss as gracefully as possible. John said he could face it if it could be in that house and with me. A passion for music, poetry, nature helped me through and still sustains me in bad times and good. I was writing about the experience while living it. I asked John a few days before he died if he wished he could have died in surgery rather than live through the pain and fear that followed. His answer: “No, I’ve learned so much.” So did I, John, so did I.

It’s some of the small things that really make this piece work for me—the single iris, the helpful black snakes, the frogs on the glass. Would you like to talk about what had the most resonance for you in writing this piece?

The flow of life represented by these creatures and by living in an old house gave me a sense of continuity. Who planted the iris, when did the first black snake move into the stone wall, how many generations of tree frogs pressed against the living room glass with their big suckered feet? What was represented by the sense of a ghost of some past tenant? There was a feeling of being observed and observer that was unique in my experience. I’d say the quirkiness of a previous tenant who found a stone that perfectly fit a hole burned in the wide plank floor by a fireplace ember instead of repairing it, has the most resonance for me. I can still feel the heft of it, the patina polished by how many footsteps over the years.