I worked in college admissions for a number of years and in all that time we never “rejected” one single student.  Honestly.  Instead we “denied” admission to them – thousands of them, most of them.  Deny does sound gentler than reject.  In fact, just reading the definition of reject makes me wince:  “Dismiss as inadequate, inappropriate or not to one’s taste”… “fail to show due affection or concern for…”

But, of course, no matter what we called it to make ourselves feel better, the impact was just as harsh.  One of 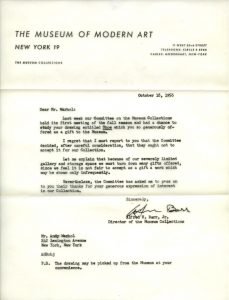 my tasks as an Admission Officer was to field the phone calls that poured in after the decision letters went out.  The vast majority of these calls came not from the “denied” students themselves but from their parents and the anguish in their voices made it plain:  they had sent us their babies to consider and we had dismissed them as inadequate.  We had failed to show them due affection or appreciation.

Any writer can empathize.  Submitting a manuscript for publication really is sending your baby out there for someone to pass judgment on.   And there aren’t even any gentle euphemisms in this process.  An editor using submittable.com can simply click on the “reject” icon and opt to send a form rejection email.  And that’s that.  Bye bye, baby.

I don’t subscribe to the theory that rejection somehow builds your character.  Or that it teaches you much – it’s too random and subjective.  Also, it doesn’t really get easier to take.  But, what it does signify is that you are working – you have something to submit.  For writers, that can be the bigger part of the battle.

As Streetlight’s fiction editor, I think we have a pretty user-friendly submissions policy.  We welcome work from emerging writers as well as seasoned writers.  We allow simultaneous submissions.  We charge no reading fee and, unlike many quarterlies we read submissions year round.  At the end of the day we do have to turn away stories – and it is certainly subjective –but I like to believe that, in our process, we have shown due affection and concern for your babies.

dismiss as inadequate, inappropriate, or not to one’s taste : union negotiators rejected a 1.5 percent pay increase.

• refuse to agree to (a request) : an application to hold a pop concert at the club was rejected.

• fail to show due affection or concern for (someone); rebuff : she didn’t want him to feel he had been rejected after his sister was born. 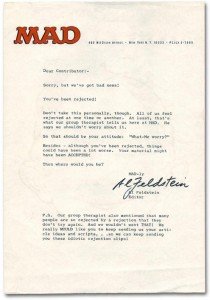