Three hours north of Augusta, the music
pumped through our car speakers asks on repeat

I must admit I think I do, only
what I want is akin more to that James
Dickey, canoe down a river, drunk fun
voyage, something action, some adventure,
but not even that. It’s the ride I’m in now,
four friends in a Ford carousing around
Rabun, North Georgia chanting mid-90s
rap to mica-lined rocks, them shining back
like broken disco balls, sort of a strobe—
ample and everywhere.

That’s what I like:
acorns and tight jeans, some crooner’s offer
of his lap like a sofa, armposts worn,
the cat that scratched it conspicuously
gone, its mica-stud collar left behind,
it missing several stones, the crumbled weight
on this valley road’s shoulders.

There are terms
for this—weak basal cleavage, smooth fracture
base—and less rigid words. Neat no longer
describes the lunchbox I owned but whiskey,
no rocks, when I can find it: the village near
here dry but for one facsimile bar
in a restaurant chain, saccharin mixers
and see-through lager.

Isn’t it enough
to be remembered? To hear your CD
blared from a four door with its windows down,
to lean out those windows in pairs, yelling
HEY GIRL at large men clad in denim, beards?
To then, as if penance, take the next curve
slowly, let the Ford coast downhill, asking
its question
—want, don’t you want?

The Sounder of Quiet

Collected, these summer hogs rub the points
of their tusks through sharp scrub, wanting nothing
but estrous sows to note their roam. Some points
as this are kindly plain: each star’s shy point
promising dawn should promise hogs prey—
worm, berries, tender bark—that when on-point
before the burrow, static and poised, point
in the sounder of quiet guard, some thanks
will be grunted. The shoulder-touch of thank
you, maybe a rut, simple sex. Each point
of contact a way to survive. No guilt
in digging up succulent roots. No guilt

when standing in night-clean rain. The gilt
watch I stole stays in my pocket. It points
out minutes, sometimes hours. I am guilty
as is this relic’s pewter, its soft gilt
false as I am false, us no gold, nothing
but show. The tusk-snout stamp it bears. The guilt
I bear—theft and more. Promiscuous gilts
are renamed sow after their first rut. Pray
with me, as if watch-hands at noon, quick prayers
that sex will not rename us—shame or guilt,
slut or whore. The courted sow, little thanked
by her boar, farrows in a hole alone. I thank

my mother for her C-section scar, thank
her for my middle name. The family guilt
she bore—grazing and wallowing (thankful
to have him) with an old man. Ernest thanked
you back, Mom, it’s true. Holding the knife point
in one hand, sponge in the other, Dad thanked
in soapy grunts each fork and spoon. Thanks
means bless, I’m told, so bless you. You know things
a nurse would about labor borne, nothing
new to scissors splitting vulva, the thanks
in each infant who cries and breathes, cooed praise
to each mom as you sutured her wound. Pray

the next one’s cervix is strong, then say prayers
for the small dead in the back room, thankless
black bags, biohazard signs. Who else prays
for their loose skin, skull going jell? What preys,
Mom, on the litters of sows? No guilty
raptor, no lioness purrs. Hunter prayers
fleck riverbeds like bullet casings. Praise
to every piglet which grows into pointed
ivory tusks that curve back and up, that point
skyward in the way of all things that pray.
When born out of wedlock, your name is nothing
but bastard, and that means you are nothing,

no family name. How some sows think nothing
of nursing foster piglets. Knelt curs pray
and wean beside blood-strange brothers, no things
off limits as if kin, no gores. Nothing
like allosuckling to humans, thankless,
calling it milk theft, calling slut, nothing
but a slut, keep your damn kids. Who knows: things
could be worse. The wolf could come home, gilt
in the scalp of Goldilocks, combed mane, guilty
in grandma’s scarf, hungry for pig, nothing
about to stop it, its incisor points
ready to rend fur and hide. At slow points,

the wolf-lady lounges, knitting her point-
de-reprise into nets. Of this nothing
comes. The boar takes an aardvark’s burrow: thanks
for soft grass, roots all around. There, guiltless,
she lies alone—grunting, sounding, sleep, praise. 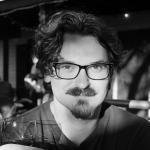 David Antonio Moody writes out of Tallahassee, FL where he pursues a PhD in poetry at Florida State University. Former poetry editor for Saw Palm and Juked, David is production editor of Cortland Review and Southeast Review. Winner of a Zbar Poetry Prize (2009) and an AWP Intro Journals Award (2014), his work has appeared or is forthcoming in Eleven Eleven, 22 Magazine, Sweet, Spillway, and Artful Dodge.