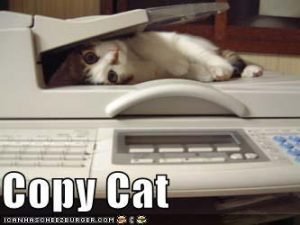 I’m creatively constipated. That’s right, all input and no output. Binging on poetry, nothing to show at writing group. Forget the fifth round of revisions on that damn poem that won’t cooperate. Not inspired. Not even trying.

Reading a favorite poem the other day, I detected a familiar aftertaste, a refrain in my head: I never come up with ideas this unique, this good. Intellectually, I know better than to let that thought discourage me from writing, but let’s be honest—it still does.

So, I compromised with myself. If I couldn’t write something this good, I could at least copy it for the sake of improving my own writing. I’m not talking about T.S. Elliot’s idea that “Immature poets imitate; mature poets steal.” This wasn’t going to be a poem for the portfolio or even for the light of day. This was just me trying to keep the writing muscles moving. (The only analogy I can conjure here is one of those ‘exercise’ belts that electroshocks your muscles to spasm. Lose five pounds in five minutes!)

I chose an apprenticeship exercise that one of my undergrad poetry instructors had us do. Study a particular writer’s style, subjects, voice, and then try to write a poem mimicking it. Since the poem I’d just read was short and simple, I used its existing structure and language, substituting out verbs and nouns. My poem had to reflect roughly the same concepts as the original and my words had to have the same syllabic count and sound patterns as the poet’s.

For a nine-lined poem, this was really difficult. But it made me study—and further appreciate—this particular poet’s precise use of  language and rhythm, how the word “numeral” would be preferred over “number” for its soft ending. Emulating the concepts forced my thinking into levels of abstraction that I admire in the poet but don’t often reach on my own.

If you’re stuck, frustrated, uninspired, give it a try. Admittedly, it’s probably easier done with poetry than prose, but the practice is good for any writer. Go on. Be a copycat.