The 21st annual Virginia Festival of the Book opens in Charlottesville this coming Wednesday, March 18. I do recommend it. An amazing assortment of programs will be offered. Find the whole wonderful schedule at  http://vabook.org/ I’m not touting for any particular one of them (there are so many and they are so excellent) but I do find myself thinking about what it means to go to a festival — a very old habit of the human race.

It happens today that I’m thinking about Chaucer and his Canterbury Tales, because they’re such a nice frame for thinking about what it means to go to festivals, but especially this one..

In Chaucer’s tales, of course, everybody had an ostensible religious motive. It’s a kind of later development of the concept that we now have festivals for all kinds of things – not just, or even primarily just — religious, but musical, philosophical, artistic, psychological, even patriotic. 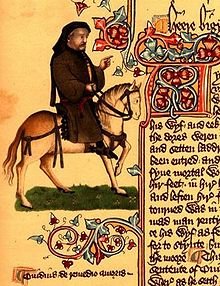 That’s a pretty broad interpretation of the idea, but the book fest that’s happening here in C’ville is closer to Chaucer’s concept than might at first seem so. And I don’t mean only because a whole lot of people are going to be telling each other stories over the next four days.

The Festival of the Book isn’t a mere local phenomenon. You can tell that by the way they ask you, in the evaluation sheets:  Did you stay at a hotel? Did you eat at a restaurant? Are you from out of town? In other words, it’s what we call today, a destination event, a term that surely would also have been appropriate for your average pilgrimage. Not only because the destination was sacred, but because people were expected to do those same things – come from out of town, stay at an inn, eat a meal or three. Contribute to the welfare of the said destination.

And what did they hope to attain for themselves, those pilgrims from out of town? From Chaucer himself we get a hint they expected something in addition to — if not instead of — religious enlightenment.

For one thing, they expected entertainment. But something more too, I suspect. And I suspect that

something more  is  part of what brings us all to this particular destination event. We hope, somehow, that it will change our lives.

It might be a leap too far to call it religious enlightenment, but I think the kind of intellectual and emotional involvement that goes with immersing oneself for the four days in the world of writing can have  a deeply spiritual element. And it certainly can be a lot of fun. If you live here in Charlottesville — or you’re in travelling distance, I hope you get to the fair. Some part of it, at least, maybe a reading or two, maybe a luncheon with a famous author, maybe a panel discussion. It’s all good. And, just like a pilgrimage, it’s – except for the transportation and rooms – mostly free. Cheers.