Ben had wanted to leave earlier but his brother couldn’t take any more time off. Ben glanced at Willy, who was leaning against the passenger-side door, smoking like a chimney.

“Can we stop for food?” Willy asked.

“Quarter to ten. I didn’t get to eat dinner.” He exhaled out of the window.

A mile up the road there was an exit marked with a knife and fork. They’d make it quick. Plus, Ben needed the coffee. Willy had said he could drive, but Ben knew better. His brother would do something stupid like break the speed limit and then the cop would find out about Willy’s DUI suspension and both of them would miss the funeral.

Inside there weren’t many customers, just an old man in flannel eating eggs at the counter. There was a cook and one waitress. She was a redhead with a bob, like a girl from an old Coca-Cola ad. She smiled when they walked in. A cutie, Ben thought. He knew Willy was noticing, too.

Ben asked for coffee and water. When she turned to Willy, he just nodded, smiled and tucked his hair behind his ear. That was his way of dittoing the coffee and somehow she understood. He could get away with stuff like that. Always had. He had shoulder length hair, almost golden. He got it from their mom. That’s what she had always said. Willy’s shoulders filled out his jacket. He was young and beautiful. That’s what most people thought, at least.

When the waitress brought their drinks, Ben ordered an omelet and Willy ordered three waffles and bacon. She walked away and Willy reached into his coat. He pulled out a flask and poured a little whiskey into his mug.

“Is that necessary?” Ben asked. He looked out the window. The parking lot lamps cast a thick creamy glow on the place. He couldn’t see much past them.

“Helps with the nerves,” Willy said. He stirred the coffee and took a sip. “Least I’m honest.”

“Mom’s not driving and neither am I.” He reached for the sugar and poured it in for a few seconds. “Might not be a good idea, but might not matter much, either.”

Ben stood up and went to the bathroom. He splashed water on his face and fixed his hair. He spent a few moments looking in the mirror, flexing his jaw under the lights.

Back at the table Willy and the waitress were laughing together.

“Benny, meet Claudette. Claudette, this is my brother, Ben.”

Willy’s energy was picking up. He was a good host. At Christmas and Thanksgiving their parents would put him by the door to welcome all the aunts, uncles, grandparents and cousins. When he turned fifteen, their dad started letting him say grace.

“Ben, I told Claudette here, we could give her a ride home,” Willy nodded through his words, and made eye contact with Ben. “See, she usually’s gotta walk, but it’s dark and kinda far. Plus, the roads are all wet still. It’s dangerous.”

“We should really get going, Willy,” Ben said fast. He didn’t want to look up at Claudette, but couldn’t help himself.

“It’s only about five minutes north of here,” Claudette smiled.

She’d done this before, Ben could tell. But still, the way she smiled made him feel special and he needed that. When their father had called about the car accident he hadn’t been able to get out of bed for almost two days. Willy had to come by and make him shower, cook him dinner, get him to laugh.

Ben tried to joke. “So when you tell me five minutes, you don’t mean five hours, do you?”

She grinned, shook her head.

“I told you we could swing something,” Willy said. He tapped her hip with his hand. “My brother is a generous man. He could never turn down somebody in need.”

“I get off at eleven,” Claudette said, crossing her hands behind her and dancing a little. She wandered back behind the counter and refilled the old man’s water. When she brought out the food Willy covered his waffles in syrup. His bacon, too. They drank coffee until she was off work. Ben didn’t see Willy put any more whiskey in his mug. That was a small victory, but still a victory.

Claudette had lied a little. They had to drive the winding, unpaved road slowly and it took almost twenty minutes until they came to her place.

“You really walk all this way?” Ben asked.

“And you live alone?” Willy asked.

“Just me and Travis, my dog.” She looked out the window. Ben watched her in the rear view mirror. She breathed on the glass then wiped away the fog. “I like it out here. It’s quiet and there’s no one to bother you like in the city. The people are nice, like you all. When I lived in the city, nobody would do something like this for me.”

“People will always surprise you,” Willy said. He flicked his cigarette out the window.

Claudette lived just off the road in a small apartment complex that looked like a two-story motel. One of the units had the glow of a TV in its window and the other three were dark.

“You’re gonna let me be a gentleman and walk you to your door, aren’t ya?”

Ben was still watching her in the rear view. She sighed and raised an eyebrow, just barely. She’d undone the first few buttons of her shirt. She looked relaxed.

“Well, I wouldn’t be a lady if I didn’t let you be a gentleman, now would I?”

Before she got out of the car, she put her hand on Ben’s shoulder and thanked him. She gave her same warm smile and instructed him on how to make his way back to the highway. The woods were confusing, easy to get lost in, she warned. She got out and closed the door.

Ben put his hand on Willy’s leg. He met eyes with him. “No funny business, we’re running behind already. Walk her up and come right back. We gotta get going. I mean it.”

“I’m not gonna let you down,” his brother smiled.

Ben figured he’d smoke one of Willy’s cigarettes before he went up to get him. He sat on the hood of his car and looked at the stars. They engulfed him out here. Claudette was right. It was nice in the country. He thought about his mother and how she had been proud of him and how he had not gone to visit her near enough as he could have, should have, but he thought about her faith and knew that he would see her again, and that they would hold each other again someday and be at peace. Wasn’t that a comfort?

He was sad for Willy, though. The last time he’d seen their mom was at the intervention. Willy told her and the rest of the family to fuck off right up to Heaven. He’d thrown the lamp across the room and stormed out on them. He hadn’t meant it, they’d all known, but a son should never have to leave his mother that way.

When Ben opened Claudette’s apartment door, he saw Willy kissing her with her top off. They both stopped and looked at him in the same way that a man looks in a mirror, shocked to see he’s changed. They shot back from each other. Claudette reached for a blanket to cover herself.

“I’m coming. Just give me a sec,” he stood up and started to fuss with his jacket.

“Stay here,” Ben said again. “It’s better this way.” His voice was still soft, but there was authority in it.

Willy paused and started to sit back down. His eyes began looking heavy. Claudette’s were heavy, too, Ben would imagine later. He cleared his throat, shut the lights off and closed the door.

He walked out into the nighttime, the air thick after the rain. He thought of Claudette’s face, and of Willy’s, of his father’s, and his mother’s, and he thought of the way people cope, the way they escape. He would be driving for miles, he knew, trying to escape back to the same highway that he would travel the whole night, and even further after that. He thought ahead to seeing his father, and weeping with him, and to explaining why Willy had decided to stay home. But before that, he would have to face the country roads and all their hills, the way they twisted, and the way they tempted you to turn another way. All of it, he thought, an endless tunnel of pine. 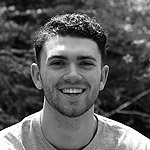 Sam Zafris is a senior at The Ohio State University and studies English in the Honors College. His mother, author Nancy Zafris, inspired him to explore creative writing and continues to be a huge support in Sam’s attempts to produce his own poetry and prose. Outside of writing, Sam is very involved in his church and enjoys sitting on porches with friends.
Follow us!