It’s a highly discriminatory practice, but on this small tump of an island in the middle of the Chesapeake Bay, dark-haired boys are the ones rewarded as harbingers of good luck for the coming year. If such a child crosses your Tangier Island threshold on New Year’s Day he’s due a dollar for the blessing he’s provided you. Other children tag along and receive spare change for their efforts, but the tradition of New Year’s Giving clearly benefits the raven-haired the most. 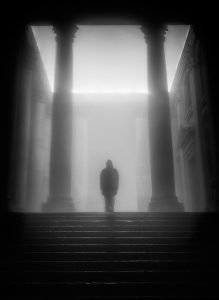 What is it about the doorway that inspires such superstition? Brides must be carried over them. In Russia, it is believed to be the abode of the “house spirit,” separating the realms of home and world so that to shake hands or kiss across a threshold is considered to be bad form bringing bad luck. In ancient Rome, one always crossed the doorway with the left foot first. But nothing is more persistent than the lore of the First-Footer, the belief that the first person through the door on the year’s first day augers a sign for the year to come. It’s often accompanied by a parallel belief that nothing new can come in until the old has gone out, hence the New Year’s Eve practice of leaving windows and doors open so that all things old can flee.

Counselors know the phenomenon of the door-knob moment – that instant at the end of a session when the patient puts a hand on the knob and pauses. What follows is often the speaking of the thing that must be said before the threshold can be crossed. It’s usually the most important sharing that the patient does. It’s the import of the door and the dread of living on the other side of it one more week with the unspoken secret that prompts this act and a good counselor will allow a few extra minutes for it.

In his recent book, Between the World and Me, Ta-Nehisi Coates tells the story of how limited his world had become through the experience of being constantly concerned for his security as an African-American man in the U.S. Then, his wife took a trip to Paris and she brought back pictures to show him. “Many pictures, all through Paris, of doors, giant doors—deep blue, ebony, orange, turquoise, and burning red doors. I examined the pictures of these giant doors in our small Harlem apartment. I had never seen anything like them. It had never even occurred to me that such giant doors could exist, could be so common in one part of the world and totally absent in another. And it occurred to me…that France was not a thought experiment but an actual place filled with actual people whose traditions were different, whose lives really were different, whose sense of beauty was different.”[1] 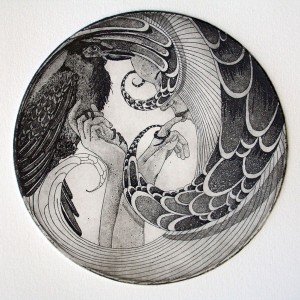 That’s the promise at every threshold – that there are new traditions, new beauty, and a new reality on the other side, but there is danger in the transit to it, (hence the ancient Roman warnings about tripping at the doorway – another bad omen). We are vulnerable at the threshold, letting go of the old even if it is killing us and stripping to our skivvies, or, better, our bones, to face the new. The practices that will allow us to thrive out there have not yet been honed or even imagined. But the same compulsions that drive us out will soon bring us across other thresholds, or back to this one, where we perhaps are a little skinned and wizened, ready to be dark-haired strangers for someone else.

Alex Joyner is a writer and pastor on Virginia’s Eastern Shore.  His most recent book is A Space for Peace in the Holy Land: Listening to Modern Israel & Palestine, [Englewood Review, 2014].

2 thoughts on “Dark-Haired Strangers at the Threshold”