I met Eleanor Gaver in a writing workshop in L.A. and we kept in touch after she and her husband and daughter moved to NYC. I knew she had recently finished a film and knowing how hard it is to get financing I asked her how Here One Minute was able to go from script to screen.

Eleanor: I got so tired of writing scripts and waiting years to get the money to make the film; I was so tired of hearing, ‘No.’ I decided to make a film regardless. I wrote the script for Here One Minute, and found four acting students from the Stella Adler Studio who were very young and enthusiastic. But I soon realized they had no experience. And to work around this I realized I needed to let them play close to who they were. So we began to workshop my script. We improvised scenes, wrote, rehearsed, rewrote and rehearsed and shaped the story’s characters about who these young actors were as people. Basically they wrote their parts and we got the script to sound like them. You might say Cassavetes style. 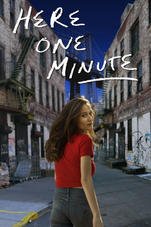 The kids who played the graffiti boys were kids my daughter knew from high school and kids pretty much on the street. When we decided we were going to have these graffiti kids in the film we began going to the neighborhood parties and filming them so they’d get used to me. And we figured out which ones would be best for our film. It was all part of the rehearsal process. We never knew if they were going to show up. One of the kids was arrested and we had to rewrite his part. Another one said that making a movie changed his life and he went into rehab.

It took us four years to make Here One Minute . We started with Kickstarter but their all or nothing policy made us move over to Indiegogo. We raised $17,000 on Indiegogo which paid for the initial three week shoot and a rough edit. The producer then screened it for an investor, who paid for an additional week of shooting and the post-production. Only the DP (director of photography), his crew, the sound person and the editor were paid. Everyone else worked for free. Crowd funding is very hard beyond family and friends. I was just so thankful that all my actors, volunteers, stuck with us for the four years it took us to make the film.

Our first distributor went out of business and then Gravitas Ventures came in as our distributor. We cut the trailer and put it on Instagram and Twitter and Facebook.The premiere, the first time screened, was at Dances With Film in 2015 in L.A at the Chinese Mann Theatre. That was a nerve-wracking experience for me. I kept looking at the edges of the frame of the big screen. I was so afraid I’d missed something on the film while working on my computer.

It’s a good time for young filmmakers because you can do it all in your computer. It’s all digital and you don’t need a print. It’s just getting the people to see it and grow your audience beyond the people you know. Here One Minute will play in different places—video on demand, streaming, iTunes and Google Play.

Eleanor Gaver: I studied film at N.Y.U. MY first feature, Hearts and Diamonds, was bought by Prism Entertainment, which then promptly went out of business and the film was never released. Next I made a biker picture, Slipping Into Darkness, for M.C.E.G. Entertainment in exchange for them funding my next film, but then they went out of business. I directed some music videos and episodes of Tales of the Darkside. Then, I made Life in the Fast Lane with Fairuza Balk, Noah Taylor, Tea Leoni and Patrick Dempsey. Fox Searchlight optioned one of my scripts and asked me to make a film for their Searchlab, so I made Buddy’s Big Break. And now, Here One Minute.

“Here One Minute, set in New York City’s East Village, this timeless coming of age story highlights many issues facing today’s youth. This gritty indie film depicts graffiti, sex and substance abuse in a way that recalls cult classic, Kids. Larry Clark’s recent comments surrounding the Kids’ 20th anniversary that “Kids could not be made today” are challenged by Here One Minute, which centers around a group of kid’s search for answers surrounding a night that ends in tragedy.

Shot on the streets of New York with a shoe-string budget, it was important to Eleanor Gaver (Writer, Director) to capture the heart and soul of the city. Producer Schuyler Quinn felt it was a natural fit to cast up-and-coming actors alongside New York natives. The authenticity of the casting is immediately evident by their unique slang and inherent swagger. “We show sex, drugs, the streets of our city, but we aren’t trying to glamorize the lifestyle…this is just an honest tale about what it’s like, growing up in New York City right now.”

Watch the trailer for Here One Minute: