Monday, October 10, is (or was, depending when you’re reading this) Columbus Day—in case you were wondering why there was no mail. Columbus Day, recently voted National Holiday Mostly Likely to be Abandoned in the Near Future, is a federal holiday with a short history as well. Proclaimed in 1937, by President Franklin Roosevelt, it commemorates October 12, 1492, You know, 1492 when Columbus sailed the ocean blue—and by the way landed in what was then known as the New World (though probably not to the people already living there). It was also, of course, not anywhere in the United States that the said landing occurred.

But never mind. Christopher Columbus was well-known as having originated from Genoa Italy and that was sufficient to make recognition of his exploits politically welcomed—not only by Italian-Americans, but by Roman Catholic Americans in general (see: Knights of Columbus etc.). I remember that my own (Roman Catholic) grandmother had some interest in this recognition, no small subject in a country which had yet to elect a Roman Catholic president. And, of course, it can fairly be argued that Columbus’s bumping into the Caribbean in the fifteenth century was an event with enough far-reaching consequences that it ought to be recognized.

Not everyone agrees about what form that recognition ought to take. Columbus Day is not a recognized holiday in the states of Washington, California, Oregon, Nevada, or Hawaii. The Seattle Washington Human Rights Commission, on June 5, 2014, passed a resolution to establish the second Monday of October as Indigenous People’s Day, as did the Minneapolis City Council on April 25 of that same year. I’ve been reading a very interesting new book, which is not about Columbus, or politics in the United States, but an early chapter had some remarks that struck as resonant to this subject. On page 55 of Jungle of Stone (Harper Collins, 2016), William Carlsen quotes Alfred Crosby of the University of Texas, in regard to the European incursion into Central America: “The conclusion must be that the major initial effect of the Columbian voyages was the transformation of America 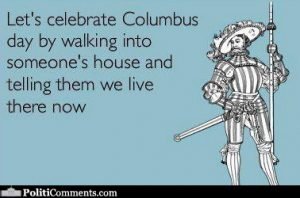 into a charnel house. The European invasion of the New World reduced the genetic and cultural pools of the human species.” That seems to sum it up. Carlsen does go on to note that most of the loss of life came about because of disease; the native populations were just not inured to smallpox and the other plagues brought by even well-meaning Europeans. Still, there was an amount of bloodshed that can’t be overlooked.

So, Happy Columbus Day, eh? By the way, October 10 also commemorates National School Lunch Program, Fire Prevention Week, and in South Dakota, Native American Day. We’re tryin’, we’re tryin’. Wherever you are, and whoever you commemorate, I hope it’s a good one. Peace.