She felt the first loose tooth at 5am on Tuesday. A back tooth on the lower left side, her wisdom tooth? She felt it the moment she woke up, lying in bed while the monitor screamed in her ear.

“You should do something about that.” Ted’s voice mumbled next to her and she quickly pulled her tongue away.

“I have a dentist appointment next month,” she said.

“I meant the screaming.”

By 7am the tooth had fallen out.

It wasn’t her wisdom tooth after all, but her 12-year molar. #18 on the tooth chart she’d found online while pretending to check the evite to Ted’s dinner thing.

The tooth was dead now once it had fully fallen out, she read, scrolling through her phone with one hand and spooning baby cereal with the other. She would have to get a replacement, something like a bridge or a dental implant which sounded painful and expensive, she’d probably have to get a sitter for the entire morning. The hole was barely noticeable even when she opened her mouth really wide, she wasn’t sure she even needed a 12-year molar. Probably another unnecessary part of the body that evolution didn’t take care of like the appendix or the pinky toe.

Ted called out a reminder about his dinner thing tonight and the front door slammed shut. She pushed her tongue in the muddy hole and wiped cereal off the floor.

The second tooth fell out when she was trying on dresses for Ted’s dinner thing. She yanked the zipper hard over her ribcage and heard a sharp ping as the tooth hit the glass top of her vanity. The infant seat bounced and squeaked behind her and she frantically searched for the new hole, counting backwards with her tongue until she reached #8 on the upper right side.

She pinched the tooth between her fingers. After all the money her parents had spent, braces, a retainer for her wedding, teeth whitening she started back in her sorority days. This time the hole winked back at her when she opened her mouth wide. She practiced yawning, laughing, yelling at the cat, the black hole shined out. She would have to take care not to smile too much tonight or speak too grandly. At naptime she sang Itsy Bitsy Spider very softly, barely moving her lips. After shutting the nursery door she tucked the two teeth in her old ring box and went to fold the laundry.

By 2pm the ring box was overflowing and she had to move the teeth into a coffee cup. Six teeth down after the one floating in a cup of blueberry yogurt. After that she stopped eating, drinking, she no longer dared to even whisper for fear of another plink against her tongue. #23 almost choked her. She’d googled everything from “mysterious tooth loss” to “how to replace your own teeth.” Could be the lack of iron in her diet? Can new mothers lose their teeth after pregnancy? Some post-hormonal symptom no one ever talks about, like dry eyelids and cravings for dirt? Or maybe it was all the poisons in the environment. Lead in the water? The beginning of the apocalypse? Phase 1: losing the teeth. Phase 2: zombies.

By 4pm she was breathing through her nose, lips clamped shut when tip-toeing into the kitchen to drop #19 and #10 into the coffee cup. She refused to sing Itsy Bitsy Spider before the afternoon nap, closing the door on great sobbing tears before taking stock of the situation in the hallway mirror. The sitter was coming at 7, Ted’s dinner thing was at 8. How was she to explain the gaping holes in her head?

She would fix this. She scrolled through YouTube videos—regrowing your teeth with egg shells and comfry root, Do It Yourself Tooth Replacement over 70,000 sold!

A large scarf around her neck for the evening. She could wear a surgical mask and pretend she had a dire strain of the flu, bad reaction to chemo, she was bulimic, had been in a car accident.

If she could just get through this day, past Ted’s dinner thing, then she could check into an expensive hotel downtown and pretend she was on vacation, like celebrities getting plastic surgery. It would be great fun, spending the week alone watching TV while dentists came to fix and evaluate her. She could get fake teeth, beautiful porcelain teeth, she would look like a movie star! Everything was going to be perfect, she just needed a scarf or some organic eggshells. She wondered if she could shove the teeth back into the socket and did a quick google search. Storing the teeth in milk prevented the root sockets from drying out.

Ted came home at 7:15pm, freshly showered and dressed in a suit. She wondered where he took that shower. The baby-sitter was upstairs for bedtime. She could hear the teenager’s upbeat version of Itsy Bitsy Spider through the kitchen monitor, the girl’s voice sounded a little less perky than usual.

She was ready. The kitchen was cleaned, the scarves back in the closet, the cracked eggs swept up and hidden away. Black dress, 3-inch heels, strand of pearls, hair freshly brushed and shiny.

“Let’s go.” Ted swept past her, nearly upsetting the coffee cup in front of her on the counter. She tucked her clutch under her arm and met him at the door where he glanced down at her for the first time.

“You’re not going to make a scene tonight, are you? This dinner is really important to me.”

She opened her mouth and smiled. 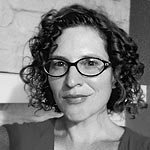 Jennifer Ann Coffeen is a writer and staff member at StoryStudio Chicago. She is a founding member of the kates and has performed her stories with Write Club, Story Club, Serving the Sentence, Guts & Glory and more. She is also the author of several regency romance novels and novellas including Priceless Deception and A Deal with Lord Devlin. Visit her at JenniferAnnCoffeen.com and @jencoffeen.

One thought on “Tooth by Jennifer Coffeen”