In their defense they did save me from a slow, painful wasting away. I was under 100 pounds when I got them—and it’s not the lungs’ fault, exactly. It’s the drugs I take to keep my body from rejecting them.

After 28 years of dealing with cystic fibrosis I was losing my footing; my health was declining. Quickly.

The steepest part of the slope began with a massive hemoptysis, a fun episode consisting of coughing up handfuls of blood all over the bathroom. My husband, whose go-to stress relief is cleaning, called the ambulance and immediately began scrubbing. As the EMT’s walked me through the house to the ambulance I got a glimpse of Jason scouring; he arrived in the ER shortly after we did, bathroom spotless. His efficiency is both impressive and slightly frightening.

The next crisis was a collapsed lung. I woke up one morning, got dressed to go to work, sat down to pee and couldn’t breathe. Jason called for help and the fire department was the first to show. While husband and dog stood protectively by, the fireman tried to convince me I was just having a panic attack. I passed out before I even got into the ambulance. Not to gloat, but fainting pointed to something more serious (read: I was right).

The collapsed lung should have been fixed with a simple chest tube but because I’ve always been dramatic I had to have the top left part of my lung removed, too. After the surgery, while waiting to be moved from the ICU, I apparently kept flashing a cop guarding a prisoner across the hall. When my mom pointed this out I logically explained he’d owe me one. I’d like to say that was the painkillers talking; it wasn’t. I’m still waiting to call in the favor.

After that I was on IV antibiotics more than I was off. I had to stop working, stop going out with friends, stop pretending I could be independent. Hospital stays were a constant. An unending rotation of loved ones stayed in my room, caring and advocating for me with hospital staff. I was cared for by some of the best doctors and nurses—kind and knowledgable, then there were doctors and nurses who didn’t know enough, and of course every type in between. I had a nurse who most likely escaped from the mental ward down the hall. Another almost killed me with the wrong medicine. My mom and I were once driven by ambulance to a distant hospital so slowly we could have made it faster ourselves. Under the speed limit. With coffee stops. I was repeatedly discharged straight from hospital to couch, unable to do much of anything anymore.

Twice more my lungs collapsed. My new lungs arrived almost certainly days before I would have died.

My family celebrated Thanksgiving in a hospital conference room while I lay in bed hallucinating (I thought everyone I knew was acting out scenes from Saved By the Bell.) After the hallucinations came the claustrophobia. It was so bad that I couldn’t have the door to the hospital room closed. Or the door to my bathroom. I think I saw my cop-friend again.

After sixteen days I moved into a nearby hotel (the three hour drive from hospital to home was too long in the event of an emergency). I settled into the suite with my husband and parents and started becoming comfortable with the new norm, which included an unbelievably complicated schedule of mood-swinging drugs that had to be followed to the minute.

And then suddenly, less than a month after my damaged lungs were replaced, I was home. And everything was more normal than it had been in years. I was exercising, eating normally, returning to life.

I did trade pre-transplant problems for post-transplant ones. I have to avoid people in general (their germs, to be accurate) because of my suppressed immune system. My exhaustion is a constant, requiring numerous naps throughout the day. Following me wherever I go, it demands the energy normally dedicated to work and social gatherings.

And for the first time I started to put on weight. In a matter of a couple months, the anti-rejection meds caused a forty-pound gain—a huge change from fighting to keep weight on most of my life. So when I look in the mirror and am surprised, I remind myself why the weight is worth it. I am so incredibly grateful to my organ donor and his or her family. I love my new life, fat face and stomach included. 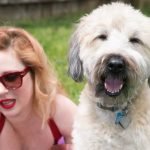 Emily Littlewood lives with her dog, Animal, and husband Jason in Harrisonburg, Va. After getting a degree to teach English, Speech and Theatre, she began working in banks. She is currently working back toward her passion, copy editing for Streetlight.

One thought on “Do These New Lungs Make Me Look Fat?”