I first read Elizabeth Bishop’s “The Fish” when I was in college. Five American Poets was the course, taught by a ruddy-faced Midwestern professor who began class by reading aloud a poem, often reciting it from memory. We were to sit and listen, book closed, before discussing anything. His sonorous voice hung in the air, like a small plane flying low over crops on a hot summer afternoon, his words trailing like a lazy line of smoke across the sky. The physical pleasure surprised me, the low hum of language a warm breeze on my skin. Self-conscious and sheltered, I’d feared the awkward embarrassment of not knowing where to look, what to do with my hands in a classroom of peers used to holding pen to paper, diligently taking notes. But this feeling of light and sound filtering through me? This was poetry?

I recalled memorizing “When Lilacs Last in the Dooryard Bloom’d” in Father Butler’s class freshman year of high school. “I mourned and yet shall mourn, with ever-returning spring,” the only line I’d retained from Whitman’s elegy for Lincoln—lovely, doleful, and to my mind dusty as a relic from the attic.

Was poetry different now, or was I? A virgin who knew much about infatuation and nothing about sex, who loved books but knew little about how to craft a life. Hadn’t I always been that way?

And then one day in Five American Poets, we began studying Elizabeth Bishop, the only female in the group, not that I even noticed or cared about her gender at the time. She was just another American poet—until I heard “The Fish.” I remember liking that it told a story, simple and direct: a girl—for once, a girl—catches a fish (no mad men chasing white whales). I liked all the images, the fish’s “pink swim-bladder/like a big peony” making me think of the flowers lining my aunt’s front walkway, its “ancient wallpaper” skin with patterns like “full-blown roses” making me think of my grandmother’s house. But then the girl made eye contact with the fish—or rather, tried to, as the fish seemed to look away, too proud give its captor the satisfaction of a returned gaze—and then the poem snapped me into something completely different, electric, tense. This fish had a “sullen face” and a “lower lip” pierced with “five big hooks” and “five old pieces of fish-line,” from all the times he’d been caught and broken away. This fish, like a war hero, wore a “five-haired beard of wisdom/trailing from his aching jaw.” What would she do, this strong girl alone in her rowboat—I held my breath in class, waiting for the professor to keep reading—now that she saw the fish for who he really was?

And then came these lines:

I stared and stared
and victory filled up
the little rented boat,
from the pool of bilge
where oil had spread a rainbow
around the rusted engine
to the bailer rusted orange,
the sun-cracked thwarts,
the oarlocks on their strings,
the gunnels—until everything
was rainbow, rainbow, rainbow:
and I let the fish go.

And that was that. “The Fish” was my poem, and the girl was me as I wanted to see myself at the time: on my own in my little rented rowboat, tough enough to catch the prized fish, aware enough to notice its complexity, and compassionate enough to let it go. I didn’t need to be all the things I thought I had to become (back in the early 80s)—the sexy rebel also a good girl also a power professional also a wife and mom also a writer of George Eliot proportions. I would live deeply and justly in the world, transforming its oily pools of bilge into a victory of “rainbow, rainbow, rainbow.”

“The Fish” accompanied me to most of my classrooms once I’d become an English teacher, a lesson in “imagery” when we studied poetry. I’d wait for the students to be moved and amazed. I’d get choked up at the end, and I’d see them staring uncomfortably at me, and then at their classmates. Someone usually asked, “What’s isinglass?,” but other than that, silence. Oh, the “terrible oxygen” in those classrooms, cutting me to the quick, as did the scummy freelance work I took on to supplement my lousy teacher income. So much for living deeply and justly.

When my friend Meg died, I read “The Fish” at her memorial service. I was 35, and she was 37, Mary to my Rhoda, Helen Burns to my Jane (she would roll her eyes at that one, and she’d be right, because she was a wicked fierce Jane), my across-the-hall friend in our DC apartment building. She was a Justice Department lawyer; I free-lanced and taught. We nursed broken hearts with frozen vodka and shared take-out over Friends and ER on Thursday nights. When her gynecologist ordered the CA-125 blood test, we called my ENT brother in California to get the low-down. That was in late July or early August, I think. In September, after surgery confirmed stage IV adenocarcinoma and a prognosis of nine months at best, Meg cashed in her life insurance and took a group of her closest friends to the Sonoma Valley, for a spa weekend. Estranged from her family, she knew we’d be her caregivers, so she thanked us in advance with a blowout girls’ getaway. I have the photos of us all in fluffy white robes, wearing green clay masks and lifting champagne glasses; alone in the room she and I shared, Meg curled up in bed and sobbed.

I thought at the time that Meg was the fish. She’d fought so hard to research and pursue alternative treatments for her disease, and to stay ferociously true to herself even as she wasted away. In hospice, when they dosed her with some awful medicine she hated, Meg kept pulling out the tubes and wires they’d connected to her, until the staff rigged an alarm to thwart her. One night the alarm went off, and the nurses rushed down the hall, only to find Meg returning to her room, having flushed the alarm down the toilet. She would take no shit, even when she weighed less than a child. She wanted to go home, and we brought her home. A lapsed Catholic from a big family, kind of like me, Meg somehow found a monk who was also a physician and an expert in medical bioethics to give her palliative care. The night she died he came to her apartment in his robes and gave her a benediction.

I was with her when she died, and I just held her and told her over and over, “ I am here, I am sorry, I love you.” She was with me but not; “it was more like the tipping/of an object toward the light.”

At the memorial service when I read the poem, before the monk and all her friends, I told the story about the tubes and alarm down the toilet, and thought about how, like the fish, she broke away from all the hooks and weight and pain, and how by dying at home—though she hated it, the cancer, the horror of all of it, not the least of it dying, Meg who adorned her refrigerator chockablock with photos of all her friends’ babies and toddlers, Meg who so wanted a family of her own one day—she somehow achieved her own victory. She hung on in her own way, and I had to let her go.

I didn’t quite believe it, but I wanted to. What would Meg have thought? It was the best I could do, and I hoped she’d understand. “The Fish” made me feel better then, and I hoped it would help those who loved her.

And now I’m old. Or getting there. That professor is long gone, cancer also. Meg would have been 57 in January, and I am almost 55. And I realize how stupid I was to think for all those years that I was the girl in the boat, and the fish was always someone else. Because now I’m the fish. My menopausal body hangs a “grunting weight,” hormonal chin hairs trail from my aching TMJ jaw, and my eyes need glasses. Wife, mom, daughter, terrified resister and persister, I find myself battered and humbled, though hardly venerable. Someone holds me half out of water, and I can only hope she’s a benevolent god, even if I don’t quite return her gaze.

So I turn again to the poetry itself, and I read “The Fish” aloud one more time and feel the transformative magic take hold. I am the girl and the fish, I am the rusted engine and the rainbow. Victory fills me up inside and out. And I will never let the poem go. 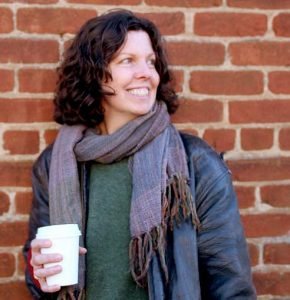 Mary Esselman has worked as a reporter (People magazine), producer (public broadcasting), researcher/writer (Discovery Channel), and teacher (University of Virginia, Georgetown University, The American University). Her work has been nominated for a National Magazine Award and an Emmy award. She is the co-editor of three books of “literary therapy” (featured on The View, Glamour, USA Today) aimed at helping women meet life’s challenges through great literature, from getting over a broken heart to managing the ins and outs of “real love.” Her fourth book, How Did This Happen? Poems for the Not So Young, tackles the absurdities and revelations of growing older as a woman, and will be released on April 4, 2017 (available for pre-order now). You can follow Mary’s “aging while female” work on Facebook, Instagram, and Twitter.

5 thoughts on ““The Fish”, A Love Story by Mary Esselman”