The footway we walk sketches
brown lines on green fields that seem
to hover over the Irish Sea. All around us
sheep and cows hold their mouths to grass,
unmindful of heaven. This perpetual path
traces cliffs, cuts into rock, curdles to mud,
descends onto beaches of rock draped
in laver fronds, home to codling and flounder.

Kelp, clams, fishermen, children who
splash and swim, all know the sea’s routine.
Even Annie the cab driver knows the tidal
ways: in out in out days nights, unending.
It’s the far away sun and the pale moon.

We are new to this isle, walk the ring
around it, study a chart of days in May
till we know the minute sea rise hits
its highest, sinks to its lowest on the shores
of Moelfre, Cemaes, Red Wharf Bay, and
Puffin Island where rats have captured the roost.

Under May’s full moon water surges 23 feet,
then falls away, a film re-wound to its start.
When the shore goes dry, tide pools become
small seas. People throw sticks, dogs bound out
over a glistening beach. Boats sit askew in salty
puddles. We walk the expanse of sand,
sink into rivulets still flowing back to the sea.

It’s the far away sun and the pale moon,
silence of unseen forces,
unremitting. 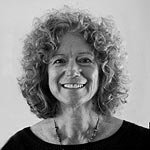