They arrived at the beach at dawn. The Family: Father, Mother, Son and Baby Girl. They enjoyed sole ownership of the beach, playing, swimming and napping as the tide rolled back. Morning settled in and they returned from their long swim to find they had neighbors, scattered far away but close enough to be acknowledged. The Family didn’t mind. There was plenty of room for everybody, they thought. However, as more people arrived, staking their plots of sand with umbrellas, tents, chairs and towels, the Family worried for a moment that they hadn’t brought a thing to secure what land was theirs.

Father and Son swam again in their underwear. Mother did calisthenics and yoga in her bra and underwear. Baby was everywhere, naked and diaper free. They had found a shovel, a big one, and dug a deep hole. But that didn’t make for land ownership, as more and more people moved in around them, pitching up more umbrellas and tents, claiming more space.

The Family dug more holes and buried each other in the sand. Within the span of time it took to take a dip in the ocean to wash the sand off their bodies, more people had arrived, setting up close enough to them to start a conversation. For every couple or group that set up around them, others made their way onto the beach, their hands filled with belongings, refugees escaping the sweltering heat of the city.

“You mind if we fill up these holes?” asked a man in a large straw hat, his face masked with sunblock. Father helped him fill the holes he and Son had dug. Soon a small village sprang up. “Happy Fourth of July!” the man in white face said, and he offered Mother and Father lukewarm beers for their troubles.

Mother, who refused any sort of handout however small, gave the man a four by six painting she had done earlier in the day. She had done ten, which she planned to sell on her neighborhood sidewalk. They were landscape paintings of the ocean, and what was behind her, though she left out the condos and high rises that rose above the boardwalk.

Soon there were settlers as far as the eye could see, right up to the line of the Family’s feet. They stood helplessly, the sound of music from four separate parties drowning out their concerns. No longer able to relax, they left the beach. It was a choice they were accustomed to making.

Aborigine by origin, their lineage had had to do the same thing in their native Australia. Bigger assets, buildings and commerce had taken their territories, the way the indigenous tribes of the Americas had lost everything. But Father was a native of Brooklyn. His father, Papa, was twelve-years-old when the family left the racially discriminatory White Australia policies for the States. But in postwar Central Brooklyn Aborigines were immigrants too exotic for a neighborhood made up of exotic immigrants. Mother was from New Zealand and spoke the Queen’s English. She grew up dreaming about New York City, the eighties era, she wanted to be Rae Dawn Chong in Beat Street. An art scholarship brought her to the city—a benefit of her bloodline, she hated to admit.

Mother and Father met online. By that time, life in New York had left them fantasizing about how their ancestors might have lived in old Australia, how much simpler life was—better even. Because to live in the city was no longer as advertised. Amenities had gotten too expensive, the rent too high. They had nothing of their own.

Papa had been cheated out of a house by predatory bankers who made him believe the twenty-five thousand dollar mortgage wasn’t worth the cost of maintenance. They coerced him into signing over the deed in order to be free of creditors. But Father never blamed the banks for taking his family home; instead, he blamed Papa for signing his chicken scratch to a document he couldn’t read a word of except for his name and address. Father made sure to burn the signed contract with Papa when he was cremated.

Mother and Father’s profession no longer paid the way it once had, if it paid at all. But to do anything different cost money—education was expensive. To move away cost more money than they had. Even the city’s air was commoditized. Their grocers now sold asparagus in bottled water for ten dollars. Competition for dumpster refuse had gotten physical. The city was talking about making diving illegal. Then what?

The family was already breaking many laws, branded criminals by the court for ignoring a number of summonses to appear. What did they want anyway, Father wondered often. They had already been evicted. If not for the kindness of their super, who let them squat in vacated apartments that awaited renovations and luxury rents, they would have been forced back into their local shelter. Father had only hurt a man once in his life and it was there, at the shelter, in order to protect Mother. Thankfully, Son and Baby were asleep. Never once had they seen him without a loving smile and something good to say, something fun to do. 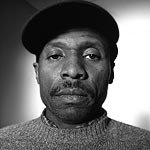 Chuck Nwoke was born in Nigeria and raised in Houston. A sponsored skateboarder, music writer and award-winning screenwriter in his former lives, he’s been published by Broome Street Review, Litro Magazine, Akashic Books, Bull, Huffington Post and Salon. He lives in Brooklyn, NY, with his family and their shoes, and is shopping his novels and story collections. Follow him @chucknwoke.

One thought on “Natives by Chuck Nwoke”