They are called Quakers because the spirit, which is in all beings, begins to move and demands a voice. They quake where they sit, on their plain wooden benches, until that which is in their hearts is spoken aloud to the Meeting. Very often what they have to share is a question or a confirmation of the notion of peace and they stand to speak in the hopes of a self and a world free of violence.

My parents joined a Friends Meeting when I was three years old. My younger brother and sister are “birthright” Quakers. My parents and I are “convinced” Quakers. I went to a Quaker kindergarten and grew up playing with Quaker kids who helped me stage Christmas plays in the Meetinghouse. I went to Young Friends gatherings and I was attending a Quaker high school when a man with a gun kidnapped me from the school grounds, drove me to a secluded area, and raped me repeatedly.

The only other guns I had ever seen were the revolver my grandfather used to shoot black snakes from his back porch, and the ones on TV and in the movies. The rapist’s gun was a revolver too, old and black, and he dropped it once. It wasn’t all that impressive except that he told me he would blow my brains out with it and I believed him.

He didn’t blow my brains out. He raped me and dropped me off by the side of the road. I ran to a phone and called the cops. Then I called my Quaker school so that they would know where I was, what had happened.

According to the Quaker ideology there is an Inner Light in each of us, even serial rapists.

There is a pile of small stones on the far, left-hand corner of the dining room table, placed there within arm’s reach of the balcony doorway. The stones are bits of blue granite dug out of the gravel in the courtyard by my dad, carefully chosen for their sharp edges and points. My mom shakes her head at the pile but instructs the cleaning lady to dust around it.

The dining room balcony overlooks the graveled courtyard and is being strangled by a sinewy wisteria vine. In the shade of this vine an elegantly mottled longhair cat named Fuzzball is living out her old age.

Fuzzball spent her life as mostly feral, prowling the jungle of our backyard, fighting off the Dobermans from next door, and leaving the occasional offering of dead mole at the back door. She never allowed herself to be touched, except for rare moments in the vegetable garden when she sidled up to lone tomato gatherers and purred for a scratch behind the ears. The contact was brief, and then she slunk away again, moving silently through the unmown grass like the ancestral cats of the savannah. We were not a pet-family; none of us moved much by any species of dumb creature. But Fuzzball, who had been given to us as a kitten by a well-meaning aunt, managed to earn our respect with her self-reliance. We threw her a handful of cat food every now and then, but she demonstrated her ability to fend for herself by littering the courtyard with the remains of small birds and animals.

It became clear that Fuzzball was aging when she could no longer make it onto the wisteria balcony in one graceful leap. She started using the side of the house as a sort of landing, jumping from the ground and hitting the wooden siding at an angle about six feet off the ground, digging in with her claws, and propelling herself the last two feet up to the balcony. The siding to the right of the back door began to look as though the house had been marked by a bear, or a cult, or something extraterrestrial and strange.

My dad, who tends not to notice cosmetic details, discovered the claw marks when my mom pointed them out to him. He looked at the scratches for a while, and then he squinted up at Fuzzball who blinked back at him from the sun-dappled, wisteria cool.

The next day there was a trellis leaning against the balcony. Fuzzball could now climb up to the balcony with ease and dignity. My dad claimed the trellis was to help control the wisteria vine, but his true motive was further betrayed by the appearance on the balcony of a small white bowl that was from then on kept full of cat food.

My dad and I are eating muffins at the dining room table. It is a warm summer morning and the balcony doors are open. We are both skimming sections of the newspaper.

“This is appalling,” I say about a front-page article.

“What’s that?” my dad asks distractedly.

“Carloads of Jewish settlers, outraged at the deaths of a mother and three of her children, killed by a Palestinian gunman, drove to a nearby village and shot an Arab man dead…”

I am interrupted by a ruckus in the courtyard.

“Damn it!” My dad tosses his paper aside, scoops up the pile of stones and leaps for the balcony doorway.

A blue jay has built a nest in the grape arbor across from the wisteria balcony. As Fuzzball attempts to trundle across the courtyard the bird swoops down on her, pecking and squawking. She turns on him, and he retreats like a coward. Her slowed reflexes no longer allow her to snatch birds out of the air and she is forced to endure the blue jay’s territorial heckling until my dad appears on the balcony with his handful of ammunition. His aim is anything but true, but the blue jay is startled into a retreat and Fuzzball continues on her way in peace.

A few days after the rape I started having a reaction to the antibiotic and abortive drugs I was given during the post-rape exam in the hospital. My dad took me to see the family homeopath. Our homeopath was Sufi, a member of another peace-loving sect, and he sprinkled a rare-flower remedy under my tongue to calm me. As we left his office, the Sufi homeopath stopped my dad.

“I have a remedy for you, too,” he said, and his voice shook a little. “Go out and kill the motherfucker.”

My younger brother is eating breakfast while I eat lunch. He is hunched and grumpy over his Cheerios. When I get up to put the remainder of my tuna fish sandwich in Fuzzball’s bowl he growls at me.

“What are you doing that for? The smell attracts strays.”

“She’s losing her appetite. Dad said we should try to inspire her to eat, give her something good.”

He is gesturing towards a huge, garishly colored water gun leaning up against the wall.

The dining room table was disarmed a few weeks ago when the blue jay gave up its siege, mostly out of annoyance, and moved its nest elsewhere. The courtyard was quiet, until the new threat appeared. Stray cats, drawn by the scent of tuna fish delicacies, have started slithering onto the wisteria balcony, hissing at the dowager cat and swiping food out from under her nose.

“To shoot the latest invaders,” I explain.

“Hmph.” My brother, who has been denied water guns his whole life on Quaker principle, ogles the Super Soaker for a minute or two and then sinks back into his Cheerios.

A few hours later my brother eats lunch while the rest of us are eating dinner. This time he ogles the slingshot that has joined the cutlery beside my dad’s plate.

“They run from the water, but they always come back when they think my back is turned,” my dad is saying. “I’m afraid there needs to be more sting involved in this defensive.”

“But do you have to use the sugar cubes from my tea set as ammo?” my mom asks.

Just then a stray rears its ugly little head. My dad’s chair flips over, the balcony door is flung open, cats are hissing, and white sugar cubes are whizzing through the air, missing their marks by yards. Fuzzball moves out of the way until the skirmish is over; then, as my dad rights his chair and resettles, she quietly returns to her meal. My mom frowns at my dad, chewing on a worried reproach, but she swallows it and chooses for the moment to follow the cat’s example.

Sometime during the months following the rape, while the rapist was still at large, a fellow Quaker came to our door. He was an old friend, someone who lived nearby. He had heard about the rape at Meeting and wanted to come and talk to us, to see how we were doing. He sat on the front porch with my parents and me.

“My wife and I volunteer in prisons,” he said. “We counsel prisoners and ex-offenders and try to help them re-enter society. I thought you might want to try this sometime. It might help you find forgiveness.”

My dad is what is known as a “weighty” Quaker. He goes to Meeting every Sunday, belongs to Quaker committees that administer retirement communities and schools, and is highly respected in the Quaker community.

“George,” my dad asked his friend, “have you ever been mugged or robbed?”

“Have you or any of your family been the victims of any violent crime?”

“Then I venture to say you have no idea what we want. I am not at the moment looking for forgiveness.”

I came home from my summer job at the YMCA this afternoon and found a box of Yellow Jacket bullets on the dining room table. It took me a moment to figure out what they were, and then I was startled and repulsed. These Yellow Jackets were meant to kill. I didn’t even look for the gun because I couldn’t fathom one being in our house. But now I see it, a rifle behind the sideboard. It looks like a toy, something the neighbor kids would play with. I pick it up and it is very light. Fuzzball is watching me through the balcony’s glass door. She opens her mouth at me. I can see her pink tongue and her little white fangs, but I can’t hear the sound of her mew. My mom walks in and sees the gun.

“Jesus Christ!” She jumps back. “What is that?”

“It’s a rifle. Must be Dad’s.” I start crying because I can’t help it.

“Okay, that’s it,” she says and storms off to find my dad.

Later, while my mom and I are at the hardware store buying Have-a-Heart traps, my dad returns the rifle to our neighbor who uses it to hunt deer that he and his family will eat. 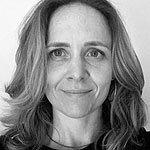 Lassiter Williams lives in West Philadelphia. She is in the final stage of acquiring an MFA in literature from Hollins College.

7 thoughts on “Fuzzball and the Quakers by Lassiter Williams”