Down two flights of stairs, I descend into an almost empty Central Station, bathing in one of Mozart’s perky piano melodies. A human din will soon drown out the pleasant music.

Hong Kong’s transportation is reliable. Almost invariably, my shuttle bus drops me near the MTR station entrance exactly at 7:05 and I’m through the turnstile at exactly 7:07, but not today. The shuttle found no traffic and was a minute early. I turned my turnstile 15 seconds before 7:07. I didn’t see, as I usually do, that middle-aged lady by the column by the turnstile wearing so much makeup, who mysteriously favors floppy straw hats and a wildly-striped shoulder bag (beachwear) in all seasons, waiting for whomever she always waits for. But, a few seconds later, descending the escalator to my train, I see her on the other side, ascending. All’s right.

If you like people-watching, this is the place for you. My train arrives and an unaccompanied old blind man meanders in the vicinity of the soon-to-close door, searching with a tapping long, white stick. A gentle hand is now on his elbow. The stranger’s guidance came just in time. What did the solitary blind man have for breakfast, or dinner last night? His predicament was so different from that of the frantic young woman I then see, in full gait, flinging her arms and a leg into the rapidly closing sliding doors, apparently risking multiple amputations. In a millisecond, she is able to nimbly freeze and pull back, athletically, almost a miracle. Why the rush? The next train always pulls in a minute or two later.

Onboard, I usually sit and look out of the corner of my eye. A well-matured man seems peculiar standing in the center of the car in his quite revealing short shorts. The camera hanging on his shoulder and appraising scan suggest he’s not from around here, probably a Brit on holiday. I suddenly remember the aquarium back at my flat, and a single White Cloud Mountain Minnow, named Fire, who likes swimming slowly through oncoming schools of crimson and blue Neon Tetras.

As the train rushes under the harbor, leaving the Island for Kowloon, its aluminum walls offer friendly bilingual tips: “Please mind the gap.” “Please offer your seat to anyone in need.” Real workers traverse Kowloon side—not Island office drones on a lark. Some are sweaty and disheveled; flip-flops and tennis shoes outnumber high-heels and loafers. They’re less inclined to heed the friendly tips, and less inclined to cozy up next to a Westerner (young kids rarely have learned this lesson). Among locals, though, a palpable remnant of some ancient Mainland ethic mixes with some lingering colonial code of conduct and produces politeness that, publicly, seldom rises to true warmth. That still beats many cities.

My colleague—who spent the summer of 2016 in Nice—told me she loves Hong Kong because it is so safe, and she likes to wander around alone at night. Back on the train, a local guy, Chinese, a body-builder you’d think, leans on a pole in the middle of the car. His shoulder tattoo is rare and still has some mild shock value in a society that, on the whole, is outwardly conservative. No worries. His harmless yin-yang tat suggests he’s not from one of the city’s notorious, though imperceptible, triad gangs. His tall Doc Martin boots and Union Jack socks, indeed, give him a decidedly foreign, British air. Swaying nearby is a young American (obviously), the only passenger lugging a hulking backpack, making the compartment seem even more constricted. His tattoo is entirely traditional Chinese calligraphy. I wonder whether he has the linguistic skills to know if the characters were properly drilled into his pale inner forearm. The American’s chin whiskers are the only ones I can see in either direction, out of the corners of my eyes.

The constant urge to avoid eye contact often leads me to ponder shoes—such variety, such thoughtfulness, such stylish statements, casual chic—a lifestyle, a person wrapped up in feet wrapping.

The generations share this early ride. A son, of 2 or 3, sits on his father, who sits beside an unrelated wizened, wise-eyed grandmother, who sits on the end of the bench beside a Plexiglas panel. As the dad dozes, his head rests on his son’s head. The wide-eyed boy keeps glancing up and down, first up at the grandmother, then down at the colorful ads on her local newspaper, up and down, up and down, before he also abruptly dozes. At the next stop, as the grandmother leaves, the father—seemingly automatically—briefly wakes from his slumber and slides down to the grandmother’s prized position, beside the Plexiglas panel on the end. It’s always better than sitting between two strangers.

Each stop brings a new crowd. A very cute schoolgirl slowly boards with both parents, her thumbs busy playing video games on her bespectacled, surgically-masked mom’s smartphone. A badly sunburnt bespectacled older man wearing soiled work clothes is perhaps heading home from an all-night shift. And a bespectacled ‘parallel trader’ with bulky boxes tied to Hello Kitty suitcases follows. This city, a city of eyeglasses, has one of the highest myopia rates in the world. Short-sightedness is a real problem.

Then suddenly, I notice a friendly young couple flashing unexpected direct glances in my direction. She has white, patent leather summer sandals, which I somehow know were bought in a foreign shop, and he’s donned off-white khakis and Ray-Bans. They’ve unfolded their Lonely Planet ‘easy-to-use’ map of Kowloon. They could be from my country, and are surely Western. Then, alas, between them, I hear Estuary English. On another day, perhaps, it would be Australian shibboleths. These two will remain strangers on a train, denied my silenced Southern drawl, my “Hey, y’all!”

Finally, it’s 7:35 and Kowloon Tong. On the platform, the human din is now in full force. Minding the gap, I deboard, then jockey for my escalator position, bag-bump though another turnstile, elbow-rub through a labyrinth of hallways, to another escalator up into the quickly fading monsoon mist. 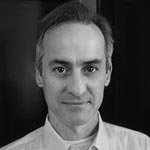