In the bath a spider crawls along the ledge.
It’s tiny enough that it doesn’t scare
this arachnophobe. Isn’t that the way
fear works, the smaller the threat the less
a reason to run? Unlike the huge, or maybe
average wolf spider that cornered me
in the kitchen. In a panic I reached for
Easy Off, sprayed the hirsute carapace
into an igloo of chemical foam.
Drenched, seemingly undaunted,
the fizzy white dome skittered across
the linoleum toward me, and I fled,
as if from Godzilla.
But here in my tub
this little guy freezes. And not knowing
what else to do with my ease, this power,
I count his legs, confirming he is anatomically
correct. Unable to take my eyes off him,
I count again, this time in Spanish. But when
I reach for the washcloth—poof, he disappears!
No sign of him on the ledge, or tub—I check
for holes in the grout—nothing. In its absence
the creature grows, becomes ubiquitous.
And isn’t that how faith works?
A reason to believe—a reason not to.

I dream of Todd, of touching
his wool jacket and it feels
like my dog. I tell him
I love him. I say it freely,

easily, the way I tell my dog.
He looks through me, doesn’t speak,
his blue eyes filled with the sea.

Along the shore
a picket fence leans. Windblown
it no longer separates land
and water, only earth and sky.

I turn to the water, tell it there is
something wrong with that fence,
the way it keeps its ear to the sand.

The fence replies, I am still a fence—
but one that no longer takes sides.

Some say our souls lose their
boundaries when we die, free
to become footprints
that come and go.

I look into the water’s eye,
blue as the eye of my dog
and realize the wave repeats
what it hears.
I say, stay.

Morning, I wake to sounds
of ball play in my yard.
I slip into a white silk robe,
study myself in the mirror.

I seem a stranger, but not
to my dog, never to my dog.

Come, I say. Come inside. 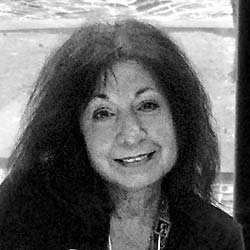 Diane DeCillis writes at her desk in West Bloomfield, Michigan. Her poetry collection, Strings Attached (Wayne State Univ. Press, 2014) has been honored as a Michigan Notable Book for 2015 and is the winner of The 2015 Next Generation Indie Book Award for poetry. It was also named a finalist for the Forward Indie Fab Book Award for poetry. She’s been nominated for three Pushcart Prizes, and Best American Poetry. Her poems and essays have appeared or are forthcoming in CALYX, Evansville Review, Minnesota Review, Nimrod International Journal, Connecticut Review, Gastronomica, Rattle, Slipstream, Southern Indiana Review, William and Mary Review, and numerous other journals.