I talk to dead people. Oh, don’t get worried. It’s not like they talk back. Although, there was that time…

What I’m saying is that I have some graves that are my favorite haunts. (And just to be absolutely clear—it’s me that’s doing the haunting.) My grandmother’s for one. But also David’s, because my grandmother is several hours away.

David, the firefighter and preacher. As his assigned mentor in the ministry, I spent a lot of hours with him. I also helped with his funeral five years ago after he was thrown from the vehicle responding to a fire call. First responders from around the state packed the local elementary school that day, surrounding his wife and young son with all the ceremony we could throw at such a tragedy. But it’s taken me years to process with him at the grave, along with all the other topics I bring to the bench his family placed before his headstone.

I choose to believe that this habit of mine is a form of conversing with the saints, whose lives, now freed from the time-space continuum, persist in endless glory. It’s also cheap therapy because, who am I kidding, I’m there to hear myself think and to be revealed in the talk.

The other day I was down to David’s when I noticed a new grave, festooned with all the accessories that mark the resting places of the recently deceased. A saucy Minnie Mouse tipped her sunglasses up to smile at me from beside the black stone marker. A serene Easter bunny stood sentinel over colored eggs nearby. A softball sat on the ledge beside a shell cradling a child and another maternal figurine.

I recognized the name. A 20-year-old young woman who died last summer. Her face was etched in the stone, the image taken from a photograph that it seemed the subject didn’t expect to be taken. She looks at the camera with a gaze that says, “Dude, why are you looking at me?” But there she is, sharing the marker with the name and birthdate of her still-living father who has staked his claim to lay beside her when the time comes.

I couldn’t talk to her. I tried, but I didn’t know her, though I felt I knew her dad. Spared the tragedy myself, I knew instinctively the shameless place within a father’s heart that would play out his grief with such extravagance, strewn across the ground where his daughter lay.

The next day at the Chinese buffet I saw David’s parents. Hadn’t seen them for a couple of years and yet there they were. I hugged his mother, as preachers are wont to do, and nodded to his father. “I was just thinking about you yesterday,” I said, hesitant to reveal my graveyard ritual in front of their tablemates. Though later I did when David’s father, a man of constant sorrows, came to our table.

“I visited David yesterday,” I said, knowing it would not surprise him. “The bench you put there helps.”

He extended his rough hand and grasped mine with the strength of someone accustomed to hard labor. “Thanks.” He wasn’t talking about my visit to the grave. It was something more. The most sincere and heartfelt “Thanks” I’m sure I ever received.

And for what? That I could share a common tear? That I didn’t turn away from the abyss that opened up in his life the day that David died? That I could still, even now, see the wonder of his son? That I know the horror, its very extent and soul-sucking power, and yet still sit down, as if it were the most normal thing in the world, at the Happy Garden, a spring roll growing cold as I receive his blessing.

There are things I wait to hear as I commune with the dead. In faith, I expect to hear them. But as I do, I know I don’t wait alone. 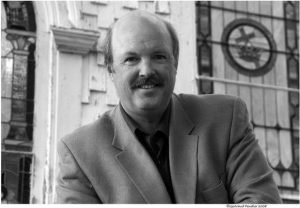 Alex Joyner is a writer and pastor on Virginia’s Eastern Shore. He is the author, most recently of A Space for Peace in the Holy Land [Englewood, 2014]. He maintains the Heartlands blog at www.alexjoyner.com.

One thought on “On Talking to the Dead”