Before there were Google maps, cable travel channels and live streaming from every corner of the Internet, there were slides, those posh cousins of snapshots. The tiny film inside a cardboard frame only reveals itself through projection on a white screen in a dark room, lending a kind of drama and mystery to each shot.

In my home, putting up the screen and watching a round of slides was an important occasion. So important that my parents invited friends over for cocktails before regaling them with a slide show of, say, Pompeii, or Rome. You see, my dad was stationed on a carrier in the Mediterranean during the Korean conflict, and my mother met him there on leave. They accumulated hundreds of slides of European landmarks, coastlines, street scenes and cathedrals, which my mother meticulously sorted, logged and filed in metal boxes.

And I have just this week thrown almost all of them away.

I am not heartless. First, I examined each box and most slides individually, using a small backlit slide viewer. Were they worth saving, these rooftops and snow-capped mountains? My sister and I determined they weren’t, unless they had a friend or family member in them. So, I bore witness one more time, and then I tossed and moved on to the next box.

After that, the slides were full of family, and that is where I mined gold. There was my mother in a shirtwaist dress and apron pulling a roast from the oven or cutting our bangs above our bobby pinned curls. There was a gang of kids in a handheld chain on skates behind a dad, whipping us along a frozen pond. There was Christmas morning all over again, with dolls and a bike and tinsel on every branch.

But these boxes, I found, had already been weeded. At some point, she had sifted for the best and put them into stacks of slides held together with rubber bands. Post-it notes in her hand were wrapped in the bands: “Family, 1950 – 1965” and “Pets, homes, trips” for example. She had a good eye for detail and the story a picture could tell, like my dad blowing bubbles with my sister and me while he was stationed at Cherry Point, NC, before heading overseas.

As I opened one of the last boxes, I discovered a DVD made in 2007, according to an accompanying invoice from a video transfer service. I had no idea it even existed, because 2007 is exactly when Alzheimer’s began to steal my mother’s memory.

I put the disc in my computer, and watched for 50 minutes, as 155 photos and 269 slides faded one to the next, set to big band music. My parents wedding day. Our old houses, our 1957 Volkswagen, our bicycles, our graduations, our own children.

It must have been quite a project for her. According to the invoice, she had provided titles for different sections and instructed that the transfer proceed in a numbered sequence.

But here’s the thing: the categories didn’t really hold, for a slide from 1976 summer might fade to a winter from 1952 or a family lineup from 1980. My sister’s daughter might fade to a shot of my sister as a teenager.

Perhaps this was her fight to clear the clouds gathering in her fine mind, months before we knew. Or perhaps it was a final gift from this extraordinary woman: a glimpse of her rich and beloved world, now refracted through the misfirings of her fallible brain. The sequence she chose for us was not linear but spinning with surprise and serendipity.

This week, I am scanning these old slides to the cloud, wherever that is. I wonder if the big bands play there, too. 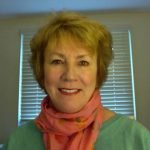 Jane Bradley began writing as a reporter for The Daily Progress, where she posted an ad under Work Wanted. She has been an editor at The Princeton Packet, an online writer for Oxygen in its inception and a frequent op-ed contributor to The Boston Globe. For many years, she has been a columnist for the Duxbury Clipper in Duxbury, Massachusetts, where she lives.

3 thoughts on “Into a Sliding World by Jane Bradley”