Who knew milk cartons had gables? ‘Embossed on gable’ said the fine print, explaining where to find the identifying information, in case of what, a recall? Dottie wondered. Does half-and-half get recalled?

The children were running, seemingly mindlessly, through the backyard and around to the side yard. Was it a bad thing that she couldn’t see them or hear them when they were on the side? She put her face close to the wire screen, straining to catch a sound through the open window.

Faint shouts and laughter bounced off her ear.

Satisfied, she hung the dishtowel evenly from the oven handle. Studied the kitchen with a critical eye. Everything did not have to be perfect but it should be clean and everything in its place. Satisfied again, Dottie sat down at her dining table and thought.

All her life she had been leaving things and people with the thought ‘just in case’. Just in case she didn’t come back, just in case she fell dead of a heart attack—a real possibility, she thought, the way her heart kept jacking its rhythm around—just in case she lost her mind and never said a sensible thing again. A stroke. That would certainly cause her to lose her mind.

Or in case she got kidnapped, or in case she got hit by a semi on the way to the grocery store or hit again by a man she once loved…So many things could happen that would justify her lifetime of ‘what ifs’.

The house was clean. Clean enough for a ‘what if.’ The clothes in the dryer were permanent press. If they had to sit a couple of days until someone remembered them, no harm would come to them. The AC was at a decent setting so next month if someone other than she opened an electric bill they would not be too hard-pressed to pay it.

Oh, but the kitchen window should be closed if the AC was on. She traveled back to the kitchen, realizing she didn’t hear the children anymore. She closed the window, carefully latching the lock, and crossed the living room floor to the front door, noticing a few dust bunnies cowering in a corner. I’ll get you in a few minutes, she promised them.

The front yard was empty. The street shimmered in mid-afternoon heat but there were no children. She hated to yell for them. Seemed like the only person who ever heard her yell was the elderly woman next door, whose shade would twitch, a shrinking eyeball hovering somewhere near the sill.

Dottie willed the children to appear. She closed her eyes, crossed her arms, thought happy thoughts about them. They were playing hide-and-seek. They were sitting in the tree house, watching her, grinning. They were on their bikes, on their way to the corner store for a popsicle.

More likely one of them was under a tree with her Kindle, reading about her dystopian future, and her brothers were poking sticks in an anthill.

A buzzing insect zoomed her direction. Impatient, she waved her arms. “JUSTINA!”

The shade twitched next door. Dottie waved at it.

Her daughter rounded the corner, a purple backpack hanging loosely off her thin, ten-year old shoulders.

Justina studied her mother, standing there in bare feet on a warm porch, a wasp zooming in circles above her head. She shaded her eyes so maybe her mother couldn’t read her face.

“You’ve got your backpack. Looks like you’re planning on a camping trip. I guess that’s where your Kindle is?”

“I don’t know where my Kindle is.”

Mother and daughter scrutinized each other. “Where are your brothers? Do you know that?”

“They went to play with Jackson.”

“I told them to tell me if they left this yard.”

Justina screwed her mouth in her characteristic side-ways I-don’t-care-what-you’re-saying expression and topped it off with a shrug. She was tired of holding her hand to her eyes so she turned away from her mother, her face hidden by her hair.

“There are no cars, mom.” Justina was used to her mother’s what-ifs.

“What does that even mean? A smarty? Nobody says that but you. I think you make things up. I think you just want me to be the girl, the dumb girl who takes care of her brothers like a dumb mother or something…” Justina trailed off. She hadn’t meant to imply her mother was dumb.

“Go get them. I’m going to wait right here.”

“Well.” Justina looked across the street in a vain hope her brothers would magically appear. “I’m not sure they’re at Jackson’s. They might be at the Sheffys.”

“The Sheffields? No way. I told them no more playing with the Sheffields. They come home with a nastier word every time they do. Go get them. Tell them to come home right now. Go!”

Her daughter’s backpack had a curious bulge in the bottom of it, thought Dottie. Not a Kindle-shape. A shape more like a…the bulge shifted.

“Have you got your CAT in your backpack?”

Justina pulled her backpack off with a wondering air. “Maybe.”

“What if it suffocates? What are you doing?”

“I poked holes in the bottom. In case he peed or something. He can breathe.” The backpack was set carefully on the ground, the zippered top flopping open. Fat Cat the Third pushed its head out, glared at Dottie, jumped and ran.

“Your brothers,” Dottie reminded her. “Go get them.”

The shade next door twitched again. Pointing toward the horizon, the angry wasp now joined by another, Dottie matched Fat Cat the Third’s expression.

Some time later, someone pulled clothes out of the dryer, shook them free of wrinkles, and left them lying on top of the washer. The half-and-half was pulled out of the refrigerator and poured down the sink, its carton flung into the smelly kitchen trash, its gable upside down.

Later still, the air turned musty. Dryer sheets were scattered on the laundry room floor, vaguely scented. The only thing moving was the shadow of a suspicious cat, darting from wall to wall, door to door, flattening himself against the window screen before jumping down and vanishing under a made-up bed.

“How can a whole family disappear?” The officer leaned against a kitchen counter that claimed to have never seen a peanut butter sandwich. “Father left work at the usual time, never got home. Work calls and calls the next day, and the next, and then they call us. Meanwhile, no family, nothing.”

His partner taps the side of the refrigerator, opens it and closes it, frowns. “No, that’s not right,” she says.

“You said the father never got here. Someone did. The half-and-half in the garbage. Clothes pulled out of the dryer…”

“Who knows when those things happened? Mother could have done it before the dad left work, before he got lost, before she and the kids, well, did whatever they did.”

“She would not have thrown out a carton of half-and-half before its time was up,” Laska pointed out. “I know she wouldn’t have. She’s too tidy a person, too thrifty. Look, the date on the gable says it was outdated last week, not three weeks ago.”

“The gable?” Fontaine looked over her shoulder at the trashcan, saw a fly land on the rim.

“Yeah. That’s what you call the pointy part of a carton.”

“This place has been gone over top to bottom, three weeks back when the guy’s employer called us.

“The place has been released, relatives are gonna come in and clean up. That trash will be the first to go.”

“What if,” mused Laska. “What if the dad did come home? What if everyone was here as usual? What if he or somebody decided to leave on a long trip for some sudden reason and they threw out stuff they weren’t going to need, like the half-and-half? Then they took the clothes out of the dryer and picked out what they needed. Left the rest on the machine. Because we only know what we see. We don’t know what we don’t see. For all we know half of the clothes in that dryer are gone with the family.”

“What if, what if.” Fontaine spread his arms wide. “We’ve been monitoring for calls and credit cards and nothing. They are not on a trip. Let’s let the relatives in. We’re done here.”

Aunt Kitty, eyes wide and mouth dry, stepped over the doorstep like it might bite her. Following her too close for comfort was her twelve-year-old son.

“Let us know if you think of anything, find anything, you know,” said Fonatine, handing the woman a set of keys an officer before him had found in a kitchen drawer, neatly labeled ‘extra set’.

Laska shrugged. “Well, there is now. So feed it, okay?”

“But seriously,” Laska continued once in the cruiser. “What if they had someone after them, what if they were scared and thought the safest thing was to just split? What if they split several directions? You could live off the grid if you had to…”

“Your what-ifs. I get you’re frustrated, we all are, but this is not going to be an easy fix, a quick solve. This is going to be one of these cases that drags on and never goes away. I’d bet money.”

“I’m not frustrated.” Laska watched the house slide by her, out of sight, as they pulled away. “I’m intrigued. What if no one ever figures out where they are?”

Behind them boys spilled out of the Sheffield’s house to play ball in the street, and no one, certainly not the departing cops, paid any attention to the faces they wore. The old lady watched her long-time neighbor bend to twitch the window shade, as she herself had so often done, to look out longingly at a house no longer hers and overflowing with answers to the what-ifs. Miles away in a bar a man with a stoic face, a heavy fist and a guilty conscience stared at the bottom of a beer glass.

Fat Cat the Third escaped through an open window and climbed a tree, where he sat in the tree house, keeping company with a ventilated backpack and the smell of a little girl too long in the sun. 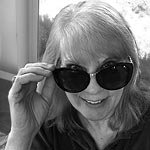 Sherri C. Perry lives in Texas. Her first book, Venn, a collection of short stories, was released in 2014 by Mockingbird Lane Press; her second book, Letters to Cadence, Musings of a Modern Grandmother was released in October of 2016. Her poetry and stories have also been featured in several literary magazines including The Bayou Review, Tigershark and Dragon Poet Review. More of Perry’s work can be found at sherricperry.com.