The number of vertebrae in the human spine
when coccyx bones are counted individually.

The temperature at which water boils on the Newton
scale. In Fahrenheit, just above freezing.

It’s a not-so-secret symbol for the KKK,
where each K is the 11th letter of the alphabet,

times three. Who died at 33? Perhaps
Alexander the Great. Yes, and Eva Braun,

Hitler’s lover, was a suicide. Sam Cooke’s age,
when he was murdered at the Hacienda Motel.

John Belushi overdosed. Jesus the Christ
was crucified at 33, after 33 miracles.

Count them yourself, if you don’t believe me,
though no one of the time recorded these events.

John Paul I was the 33-day pope, and the age
we’ll all remain in Al-Ghazali’s Heaven.

It’s the atomic number of arsenic, and the term
for LP albums, like those in crates at yard sales

played over and over in the chaos of the sixties,
our only salvation in a world that was about to end.

New moons for old planets discovered, 182
so far identified, named Ganymede, Callisto,
Titan, Ariel, Caliban, like we might name
discovered parts of ourselves that we’ve denied,
surprised to find we’d like to pick a fight, be a bully,
exert some might, or donate our life’s hours.

Extroverts, as I was in my youth, were quick
to step up to sing or volunteer to be the subject
in a demonstration, be the center of a universe
of their own creation. How odd to again discover
and accept we’re less than a tiny dot of light
in an arm of a galaxy that’s one of billions.

Collisions leave us cratered and pocked,
in a winter of emotions, trying to breathe
a vacuum. Our decibels disperse into the void.
We rise to another morning with questions
carried in pockets our whole lives, answers
ever-changing, out of earshot in great space.

Relief to find in middle age that we’re invisible,
unknown, our transgressions and blunders forgotten
before we’re gone. We could welcome asteroids
as signs of safety, grasp the illusion of immortality.
No longer at the center, stage dismantled,
we curl inward on the curve of what remains. 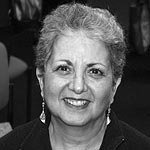 Joan Mazza has worked as a medical microbiologist, psychotherapist, seminar leader, and has been a Pushcart Prize nominee. Author of six books, including Dreaming Your Real Self (Penguin/Putnam), her poetry has appeared in Rattle, Off the Coast, Kestrel, Slipstream, American Journal of Nursing, The MacGuffin, Mezzo Cammin, The Potomac Review, and The Nation. She ran away from the hurricanes of South Florida to be surprised by the earthquakes and tornadoes of rural central Virginia, where she writes poetry and does paper art. You can learn more about her at her website joanmazza.com.