I met Sharon one Saturday morning in late September at Writer House in Charlottesville, Virginia after dropping a writer off at the train station who had been at Porches writing retreat. We talked about Playing With Dynamite, a memoir about her father who died in a mysterious and bizarre accident when she was seven.

Sharon: It’s cool to be talking to you because I was at Porches when I made the final edits on the book. It was my last opportunity to make any changes so it felt like it was high stakes and I better get it right. I felt very emotional and raw and needed to feel in a safe place and not have the outside world intrude. I needed to be in a writing cocoon where I could focus and Porches was the perfect place for that.

Trudy: Thank you. Well, I have to say that Playing With Dynamite pulled me in from the very first page. And one of the things that intrigued me was that for years you were afraid to ask questions or talk about your father.

Sharon: Yes, at the beginning of the book I had lots of questions. But by the end I figured out that the most important question was why was I afraid to ask about my father and why did I think that asking about him might kill me?

It sounds irrational and ridiculous to say that as an adult but I did feel that. I hoped that after I did all the research and talked to all the people I could and fill in the blanks then maybe I would understand on an intellectual level what I was afraid of. At the beginning of the book the only thing I understood was the emotional part, the fear of that seven-year-old. I forgot what triggered that fear as I grew into an adult, but my body remembered it, the feeling of “don’t do this because something bad might happen if you do.” I didn’t know why. I had to get beyond the place where I was stuck in a seven year old’s mind.

Trudy: Was there a particular moment when you got past this feeling that if you asked about your father something bad would happen?

Sharon: A number of things happened. One was I saw my son’s parallel path, how he was dealing with his own father, my ex-husband. And I could see myself better by watching him. I saw his fears and anxieties. They allowed me to better see my own. The other thing that happened was when my daughter turned eight I saw myself as an eight year old too. When I was eight, I was dealing with my father’s death which was fresh. Both of my children allowed me to see myself better through them.

Trudy: You write, “When I went looking for my father, I found my mother instead.”

Sharon: That’s been one of the most gratifying experiences. My mother has never been someone who talked about herself very much; she was self-effacing and like a lot of women in her generation probably felt that her story wasn’t that important. The men were the ones who went off and did the exciting things. I was really grateful to get in through the back door–as she was telling me about my father, she told me about herself and I think maybe she might not have done it if I had just asked directly. That was something I didn’t expect and it was definitely a bonus. In many ways it’s become my mom’s book. And it’s important to me that she feel it’s authentic and true.

Trudy: Did it change your relationship with your mom?

Sharon: Yes, and one of my take-aways is that if we say things that make people uncomfortable or bring up stories that people don’t want to talk about, then bad things might happen. But what I hadn’t thought about is that sometimes talking about those things makes good things happen. That was certainly the case. We became closer.

Trudy: How did you balance truth and family privacy?

Sharon: I think this is hard for anyone who writes memoir. Asking about my father did turn out to be risky but it was a different kind of risk than what I had thought. I found out that I was the one playing with dynamite. As writers we all do, but especially memoir writers. We blow things up. So in that way I am my father’s daughter.

Trudy: Did you start taking risks as a young woman to feel close to your father? To identify with what you’d remembered of him?

Sharon: Maybe, though I didn’t know that at first. We all have stories we tell about ourselves and the story that was told about me was that I was cautious. That I was the nice one. If you think of “nice” as someone who is demure and does not shake anything up, does not rock the boat, that’s actually not me. I’m rocking the boat by writing this book which is not just affecting my life but so many other people’s lives. And in that way I am my father’s daughter.

Trudy: You write “the truth is a moving target.” Will you talk a little about this?

Sharon: Another thing my book became about was the fact that everybody has a different truth. I started off with this idea that I was going to find out about my father and of course everybody has a different perspective and views him from their limited knowledge of him. Sometimes people told me different things about the same story. Or sometimes a different emotional reaction to the same things. My mother knew things that I should have remembered and didn’t. My brother and I remember things differently. I hope people connect to this experience and see that the truth is a moving target in their family too. I think learning that is a way to understand each other better. Maybe the thing you’re holding a grudge about is something you’re not remembering right. Maybe if you realize your version is not the only version, you can give that grudge up.

We decide that something happened a certain way. This is our truth and we carry it with us. And we carry around these truths without questioning them. Kirkus Reviews said that my book is about how the unreliability of memory affects our understanding of family and that is definitely one of its main themes.

Trudy: The first line of your book is: “When my father took my six-year old sister on a trip to kill a deer, the deer killed him.” You create this kind of mythical quality about the deer. And the accident.

Sharon: The story about the deer became my own personal myth. For the first time in my life I live where deer run into my yard. They still seem strange and magical. They might as well be zebras.

An excerpt from Sharon Harrigan’s, Playing With Dynamite, will be published in this magazine Friday, Oct. 6th. 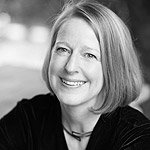 Sharon Harrigan’s work has appeared in the New York Times (Modern Love), Virginia Quarterly Review, and Narrative. She received the Joyce Horton Johnson Award from Key West Literary Seminar and the Kinder Award from Pleaides, as well as fellowships from the Virginia Center for the Creative Arts and Hambidge. A graduate of Barnard College, Columbia University (BA) and Pacific University (MFA), she teaches memoir writing at Writer House in Charlottesville, Virginia, where she lives with her husband and children.