I wrote an entirely new Chapter 1 for the new edition of Mockingbird: A Portrait of Harper Lee (Holt 2006; rev. 2016). The idea to open the biography at a low point in the her life, instead of during childhood was suggested by Garrison Keillor in a review of the first edition appearing in the New York Times ‘Sunday Book’ section: ‘If you were going to draw a movie from this book, you’d start on York Avenue in Manhattan on a cold winter night in the late 1950’s. Pages of manuscript fluttering out of an apartment window and then a young woman, weeping, picking them up out of the snow. She is an airline ticket clerk and she has been working at her typewriter late at night ever since she came to the city over her parents’ objections in 1949. She is on her own.’

I thought about recasting the action that way for months, and I liked the idea. Reordering the timeline in the book, starting with a scene built around an image of ‘Pages of manuscript fluttering out of an apartment window…’— would add more torque to the beginning by giving us Harper Lee, hopeless author in lonely, cold New York. Now, reading on, we would want to know the answer to the question, ‘How’d that happen to her?’ Suspense. And the narrative can proceed from there. In fact, Keillor sketched out how the rest would follow, by plot points, in movie treatment style.

It was excellent advice. Put the subject in a deep hole. Make reader wonder, ‘What happens next?’ Kurt Vonnegut explains that structure in his most famous chalk talk, ‘The Shape of Stories’.

In the meantime, I tried out Keillor’s advice on a completely different book. I began writing a life of of Kurt Vonnegut. And one Saturday morning, the beginning came to me. I’d start with Vonnegut in the Slough of Despair, deep in a hole. It would be a moment in his life of ‘Pages of manuscript fluttering out of an apartment window…’ I knew when it was, too. Also, I liked the irony of starting with Vonnegut in a hole like one of his characters. 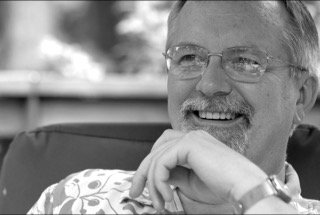 Charles J. Shields is the author of Mockingbird: A Portrait of Harper Lee (Holt 2006; rev. 2016), and And So It Goes: Kurt Vonnegut, a Life (Holt 2012). He and his wife Guadalupe live in Charlottesville, Virginia. His website is CharlesJShields.net.