The Return of the Woolly Mammoth

You rarely wore it,
though you yourself chose the color, midnight blue,
and knee-length cut. In derision, you named it
“the woolly mammoth,” pointing to its Pleistocene proportions.
Still, at each sign of snow, I nagged you to wear it.

The last time I saw you,
you confessed you’d have to give it away.
“Not one more winter,” you swore.
Yet when you chose it once more,
were you thinking of me?

Last of its species, the mammoth was hunted
to extinction.
In a different Ice Age, it took you down
under the cold waters
of the dam, and sure enough, kept you down,
sodden, for a month,
until you surfaced, found.

I like to think of you buttoned up,
and until the last
breaths, beats,
its boxy bulk somehow
kept you unaware,
insulated from creeping cold discovery. 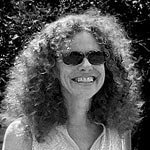 Sharon Kennedy-Nolle holds an M.F.A. and doctoral degree from the University of Iowa. Her poetry has appeared in the Dickinson Review, Lindenwood Review, Westchester Review, and The Round, among others. Her dissertation was recently published as Writing Reconstruction: Race, Gender, and Citizenship in the Postbellum South (Chapel Hill: UNC, 2015). She teaches and lives in New York.