Before my older sister outgrew me, outgrew our entire family’s chaos, we shared a bedroom. For a few years there, we were good company for each other. We would stay up after bedtime and role-play storybook fantasies about our futures that seemed more like memories of a former life together centuries ago—as shopkeepers in some village. She on the twin bed beside the windows on the front of the house, me on the bed closer to the hallway. We sold fine goods, maybe linens. We could go on for hours.

One night we decided to sneak downstairs to the kitchen. We carried a healthy dose of fear down the creaky wooden steps; we were breaking the rules laid out by our strict Catholic father. We were to go to bed at bedtime, and stay in bed until morning. I can’t say what made it seem worth the risk—we may have heard something, heard our mother down there. And there we found her, as if she’d been waiting, like a cheerful hostess. Whatever she was drinking made her more gregarious and jolly than our mother normally was with us. She welcomed us into the kitchen like a couple of bar regulars.

Our father was asleep upstairs, as were our younger sister and brother. We sat for awhile in some kind of bubble with our mother, and she acted as if she liked us, wanted us there. I didn’t care that I didn’t really understand what was going on. I ate it up. This was the mother I saw sometimes around her friends, who depended on her to make them laugh—until she became less and less dependable for that. This was the mother with a spark in her eyes and stories to tell, though not usually to her children; and this was clearly the social phase of her drunk. She decided to make us hot toddies.

It’s probably not debatable what kind of alcohol is alright to serve a child. But in my mother’s world, hot toddies were innocent enough, normal, the kind of thing you could give children to help them sleep or get over a cold. As harmless as sipping brandy to warm up in the back of a pickup truck after a long day of sledding, which we already had experience with. In this case a hot toddy was just the right thing to give your daughters after midnight one night because you don’t want to drink alone. I was 10, and my sister 11.

We sat in our pajamas on the kitchen floor’s cool linoleum tile, our mother in her usual chair in the corner with the built-in desk. She lived in that chair, at that desk. She would read books checked out from the library, the hardcovers with the crinkly protective plastic on the outside. She liked mostly women’s novels and self-help books, and sometimes she would jot down some of her own poetry. This would sustain her until late afternoon, when she’d find something to add a little kick to her tea. She didn’t used to have the time; when all four of us were younger she had her hands full. But now mid- to late-afternoon was a slog. And dinner was usually as simple as opening a few cans of vegetables and frying a few steaks or pork chops, which could be handily done with a good buzz. I hadn’t noticed. It hadn’t gotten worse yet; that was several years away still. And this night was the first peek behind the curtain of what my mother did after everyone else went to sleep. It felt special to me, and more of my mother than I usually got.

I drank my toddy. I’m pretty sure my sister drank hers. And my mother began to talk about the life she wished she had.

I’m thinking of leaving your father, she said. We stared blankly at her. With the alcohol, everything took on a surreal haze, even her shocking words. He doesn’t let me do anything. And he always wants sex, like an animal. This would be the most I ever heard my mother say about sex, even after my period came. Much later, I would understand the full point of what she was saying, and I would understand that the reason there were only four children was because of the hysterectomy. All four of us had been born in five years.

I could go to New York and paint, my mother went on. I couldn’t conceive of this, and I only had a speculative curiosity. What would it be like if she weren’t here? How would it actually be different from all the times she’s not here now? She had begun to require lengthy hospital stays due to the bleeding ulcers, another thing I only vaguely understood at the time.

There was then, an alternate version of my mother planted into my imagination, the one who could have gone to New York and been a painter. The one who could have been happy, and free. Our little social hour was making clear to me that she definitely wasn’t happy or free here at home with us. I could remember the photos I’d seen of her from years before, when she seemed more alive, less sapped of that electricity she apparently used to have. There was that photo of her picking oranges, wearing a sweatshirt that said Daytona—an artifact from her pre-married life, a trip she took once, Carol with her girlfriends. And the candid family portrait, Carol with her in-laws, sitting on my Aunt Melva’s lap, camping it up. This Carol could do anything, would do anything, would surprise everyone. But I had never really met her, only saw her out of the corner of my eye sometimes. She wore a different face around us, with most of the color drained out. Sipping hot toddies with her and my sister, I saw Carol the teenager, the young adult, the spark plug, the nut, the star, the oppressed. She was confiding in us like we were her girlfriends, revealing things.

And in this way she also shared an alternate version of my father. We had already seen how angry he would get, and how angry he would stay. And how he controlled absolutely everything in that house. It felt worse to be made aware of his sexuality (and hers), and worse still to have that first glimpse of a man’s need, and how it—maybe more than anything else—made my mother feel trapped, drained. After this I began to watch how she clung to fragments, like the afternoons or the midnights at her kitchen desk when no one, including him, was paying attention and she could do whatever she chose, as long as it fit into that little box of time and space. Sleeplessness helped her achieve solitude, and alcohol helped her feel more okay with just what she had—or when she couldn’t bear it anymore, it helped her believe she could leave it all tomorrow and go do what she was always meant to do.

I would ask my sister when we were alone in our room again: Do you think she’ll really do it? Leave Dad, leave us? She said, No. Just forget about it. It made me wonder if she’d heard all of this before. She had a way of sounding like the answer was obvious, and like it shouldn’t be discussed again. She was right, and nothing else was ever said.

That night we all hung there, in the kitchen, in the glow of my mother’s fantasy. At most, it was thirty to forty-five minutes. After that my mother’s light started to dim, and happy hour was over. She took our glasses and shooed us back up to bed. That’s enough, girls, she said. School tomorrow. On our way to the steps I saw my mother turn her back to us and knew she wouldn’t be going to bed herself anytime soon. 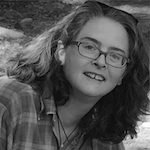 Anne Carle Carson lives and writes in Richmond, Virginia and shares an old house with her wife, her cats and a newly rescued dog. She has previously been published in Streetlight, winning second place in the 2017 Essay/Memoir Contest and was also nominated for the Pushcart Prize. She is in progress compiling a larger work about her life with her mother, and her mother’s life before she was born. Carson is also currently in meditation teacher training, and is exploring the use of the writing process as a tool for mindfulness.