We Girls sit close together in the backseat of the car: Mission Accomplished. The Presentation of Mary Academy semi-formal is tonight and I am “doubling” with my friend, Maureen (a.k.a. “Mo”) and her steady boyfriend, Joe. A doll-sized study in organization, she has mapped out routes, timetables, and assignments over the past weeks with the efficiency of an executive level manager. Mo’s huge eyes and long lashes are framed by sharply penciled eyebrows that travel to the edge of her face. Joe’s large corsage is perched on her tiny shoulder. Upswept and hair sprayed in the excitement of mascara and lip gloss, there is an aura of pumpkin carriages and glass slippers that I desperately want to share with my classmates.

“So, can he take us?” Mo asks, walking toward me. The navy wool tam that is part of our school uniform is discreetly pinned into her mass of brunette curls.

“So ‘Christ’ is going to the Semi!” Doomi teases, clomping over to join us while hopelessly trying to stuff her blouse into her skirt, her tam sloshing around on her head. More finishing school than standard parochial school plaid, the pleated, navy skirts and bolero jackets of the school uniform fit the compact primness of Mo but look dreadful on large girls like Doomi.

“‘Christ,’ did you get a parabola on Albert’s assignment?” Dale walks toward us, reluctantly unsticking her eyes from the Algebra assignment. Protected by the Patron Saint of Absentmindedness, she never twists an ankle.

This is how the mornings begin in the schoolyard of the Presentation of Mary Academy. Our group—Mo, Doomi, Dale, and me is one of many little gatherings of girls that cluster each day before the bell rings to usher in the start of the school day. No hard-bound cliques here; just groups of high school girls that have found each other. As the new girl and non-Catholic, I am quickly adopted by Doomi who gleefully dubs me, “Little Christ” when she learns my last name is “Christie.” And although I also roll over the waistline of my skirt the minute we leave school, I secretly love the uniform. For the first time in my life I have friends; I feel like other girls.

I am wearing my mother’s blue dress. Subtly flirtatious, it reflects a girlish elegance emblematic of my mother’s taste in clothing. The rounded neckline circles just below the sternum and fans outward, baring a hint of the shoulder. Pin-tucked pleats move down the bodice, making it somewhat fitted but drawing the eye toward a chaste empire waist. The sleeves are the highlight of an otherwise understated dress. They balloon, bouffant and gather above the elbow where they are finished with a thin strip of blue border—a clear endpoint. In breezy, powder blue I am joining my classmates in the social highlight of the year. Michael Twomey is my date.

“He is planning to become a priest,” Mummy says solemnly. But they spend hours talking in his black VW Beetle parked across the street from our house.

In the backseat I watch highway lights strobe the back of his head and shoulders; flashing on and off, on and off black, crew cut hair, white turtleneck, and dark suit- jacket. He is my cardboard escort; a newsprint colored cut-out of a man on loan. But the thrill of appearing with an “older man,” distinguished from the acne and bad haircuts of the boys from Central Catholic overtakes feelings of fraudulence. Maybe this Night will be Bigger than my Other Life.

On the day of the Formal, Sister Albert finally succumbs to the undercurrent of nerves distracting us from the Algebraic equation on the blackboard.

“Your minds are at home in your mirrors.” Sister Albert is feigning hopelessness.

“Did you ever go to a semi-formal, Sister?” An anonymous voice erupts hoping to get Sister Albert to talk about her life before the convent. Sister Albert Ignacious is the most popular nun at Immaculata. Towering and big boned you could imagine her as a running back on a football field.

“Not a semi,” she says, head tilting back slightly, eyelids closing in smiling memory, “but I do remember the school dances and praying that a tall boy would ask me to dance.”

It was always Christmas in Sister Albert’s eyes.

“Of course, I did!” Albert responds. “Did you think that nuns aren’t human?”

“What kind of dancing did you do?” Another voice continues the line of questioning.

“We had much better dances than you do; The Lindy, the Jitterbug. There were actually steps, not like you guys who just hang on your partner’s neck.” Sister Albert is rocking her pelvis back and forth and circling her arms around the neck of an imaginary partner. Watching a nun depict what would now be called “booty dancing” causes an explosion of laughter underscored by genuine affection that she knows these details about teenagers and life outside the convent.

“I know that Maureen is going with…,” Sister Albert pauses, hand cupping ear awaiting the class’ chorus-like response, “JOE!” Mo has been going with Joe since freshman year.

“June has a date from Central Catholic”, Sister Albert continues, referencing our brother school. And then grinning like a Cheshire cat, Sister Albert suddenly says, “But Karen has the best date.”

All heads turn unexpectedly in my direction and I panic that Albert will tell the class what I have shared with her earlier in the week: my date is not a “real date” because he is entering the seminary. Sister Albert keeps my secret, creating an air of mystery that I savor in quiet blush at having gained the attention of the most beloved nun in the school.

We stand on the dance floor eyes searching anywhere but our faces. My arms tentatively reach up to shoulders nearly a foot higher than mine. His body is all vertical stiffness; dutiful, disciplined, but polite. Uncurling nail-bitten fingers, I rest my hands on borrowed time. The room is swaying to the music of The Beach Boys.

His arms graze the shoulders of my sleeves and reach around to my back. My head inclines toward him, listening hard as my cheek rests against the small button of a starched white shirt. The wool filaments of his jacket are tickling my nose. Heat is radiating from all of our bodies as a rush of sexual mystery and its possibilities rolls over us. The weight of Michael’s large hands resting on my back feels committed through the blue linen. The space between us is getting smaller.

An abrupt release as the song ends; a jolting retraction and we spend the rest of the night hugging the wall in clipped, stilted small-talk watching Mo and my classmates dance. The blue dress is becoming a furnace fueled by the gnawing disquiet of the freakish circumstances surrounding this date. The linen fabric is darkening to cobalt as it grows heavy with perspiration and the gay sleeves are deflating. There really is no hiding in this dress.

Mercifully, the evening ends. Riding home past buttoned up, small town streets; I seek words in quiet appreciation that he has made it possible for me to attend the Semi.

“Thank y…” But before I can get the words out, she springs out of the night as if released by a trigger; all lightness and fluttery-girl excitement. The street lamp backlights her blond, wavy hair and blue eyes; the light sprinkle of freckles plays across the bridge of a perfect nose.

“You’re back!” She exclaims, sliding into the seat beside him as I silently slip out.

A bitter, jagged-edged acknowledgement that I have been her stand-in; the sickened confirmation that she is involved with him—a boy-man. The blue dress is burning.

I walk up the sidewalk to our house where my younger siblings sleep, thinking, “Something is really wrong with her. She has gone too far this time.” Looking through the living room window I see Michael’s car interior filled with her animated glow. Something has taken a turn in her. She is out of control. She is sucking my life out of me. But only I seem to notice this.

Home from school, still holding my books. A taut silence stretches thin inside our house except for overhead shoes rat-a-tat-tatting across the wooden floor of the bedroom upstairs. Climbing the stairs slowly; ears pointed alert for clues. Soft satin folded neatly inside a suitcase that lies on the floor. No words needed. All business, her gaze is directed at the window where below a dark-haired man in solemn dress coat paces on the sidewalk. The car trunk is open, waiting. This was planned. I have no questions. Instead, I watch the story of my life taking a major turn, heart-leap hopeful.

I remember thinking, “One parent is better than two like them.”

I remember feeling sure of this. 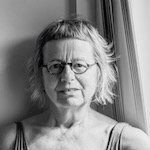 Karen Foster writes non-fiction and memoir. She took a ten-year hiatus from Harvard to study dance at the Martha Graham School in New York and to act with the Denver Center Theatre Company. Apart from academe, she has published in The Gallery of Readers Anthology and has a piece in the upcoming Salt Hill.