After I die,
prop the bones
of a beautiful bird
in my mouth.

For all these words are only feathers
that fall from the dark hollow of my throat.
Plumes which wait for a wing,
a way to lift, rise, fly.

To soar from the lips,
the fingers,
to become a prayer of fire
hitching a ride homeward. 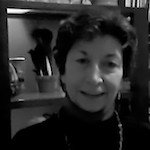 Sherrell Runnion Wigal is a poet originally from Roane County, West Virginia, now living along the Ohio River in Parkersburg, West Virginia. Until 1999, she served for many years as director of the West Virginia Writer’s annual conference. She also conducts creative writing workshops throughout her regional area. Sherrell is considered by some as a performance poet and has performed, often with old-time musicians, throughout West Virginia and surrounding states. Her writing appears in many publications throughout the country. Most recently Sherrell was juried in as part of the Women of Appalachia Speak Series.