Last month, as we celebrated our daughter’s 17th birthday, it struck me that we would enjoy only one more birthday celebration together as a family unit before she heads off to college. Her birthday falls in October, and after next year, she’ll be in Boston or DC or Iowa or God knows where, taking poli sci classes in her fall semester, drinking cheap beer and making magnificent mistakes—and figuring out who she was born to be. After so many years of princess birthday cakes and streamers and sweet 16 party carpools, the realization was stunning. This would all end, which I understood in theory, of course—but was still so astonishing to comprehend.

I realized that in addition to “firsts,” we also come to experience many “lasts,” and that there aren’t any blank books or photo albums dedicated to their documentation. The “lasts” catch us off-guard and unaware all of the damn time, and we never know to honor such moments until they are out of reach, and long past our line of sight. I didn’t bronze the last bottle that our daughter drank during a quiet midnight feeding, while we rocked together in the darkness and listened to cargo ships low their horns in the thick San Francisco fog. I didn’t think it would be the last time that I’d swoon to hear our son mispronounce his sister’s name when he was a toddler, before some neural pathway in his brain strengthened and redirected his small, rose-lipped mouth to say it correctly. I didn’t commemorate the last time I was “Mommy,” instead of “Ma.” I couldn’t have known that we’d choose the last book that I’d read to them at bedtime, or the last summer day that we’d spend together on the playground. I didn’t savor the last Christmas that they still believed, the last time we could all fit comfortably into our queen-sized bed, or the last time I’d need to drive her somewhere, before she got her license.

There were other lasts in my life before I became a mother, of course. There was the last Manhattan checkered cab ride I’d ever take, before the taxis were all decommissioned and scrapped in junkyards. The last time I’d cross East 19th Street and notice the glint of trolley car rails embedded in the asphalt—the same rails that my great-grandfather once rode as a ticket taker around “Dead Man’s Curve” circa 1903, and which strangely brought me comfort as a young woman living alone in New York City. The last breakfast I’d eat at The Paris Commune on Bleecker Street. The last time I’d hold my grandmother’s hand before she died, and the last time that my parents would pose together for a photograph before they divorced. The last time I’d see the World Trade Center, shimmering at the far end of Seventh Avenue on a hot summer afternoon, standing so tall and sure.

We cannot know when these “lasts” will happen, but we must live as if they are occurring all of the time. Not to clutch them too tightly to our bodies and psyches, but to savor them so sweetly when they have passed through us, to let them linger on our tongues and fingertips and minds, to ache so exquisitely for how it once was—as we let it all go, and marvel at what we are so blessed to have been given. 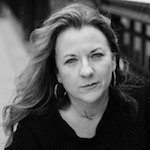 Kathleen McKitty Harris is a fifth-generation native New Yorker whose work has appeared at Sonora Review, Creative Nonfiction, Full Grown People, McSweeney’s, and Rumpus, among others. Her essay, A Timeline of Human Female Development, was recently published in the anthology MY BODY, MY WORDS (Big Table Publishing, 2018.) She has also performed as a storyteller at The Moth in New York City, and at Listen to Your Mother, a live-reading series in northern New Jersey, where she lives with her husband, two children, and irredeemable dog.

One thought on “The Last Time by Kathleen McKitty Harris”