CHECK UP OR CHECK OUT

Friday is library day for Ray who picked Friday because it kinda rhymes with library and other days don’t so much and becoming well-read and new worldly is high up on the list in Ray’s lunch pail. Anyway Ray arrives and says hello to the girl at the desk and beelines over to periodicals where he selects an issue of People and in no time remembers having read this very issue last year, the issue about Brad and his sorrowful breakup and as Ray gets up to make another selection, hopefully one where Brad’s back in love, the girl from the desk is beckoning to Ray and telling him, the doctor will see you now, and Ray being a little tired and depressed since Brad’s breakup, figures how could it hurt and follows.

Henry slept on the hardwood floor last night with his left, then right ear to it and both heard the same things that the floor was remembering about its early years in what was once the local national forest and was wondering, pining away actually for its fellow timbers and what had become of them, what might they have turned into and had they been turned on a lathe or sliced into veneer or cut into pre-cuts for table and chair parts or prostheses even or pile upon pile of what were to become Dixon® Ticonderoga® pencils for scribbling pupils or maybe ground up from the ground up into chips to glue back together to make wallboard or chips for around the bases of trees shading big fancy brick houses and all this had led Henry to tears, so many the floor was starting to warp and curl up around him like a boat which would float Henry out of there should the water pipes burst from oh so much pressure but then too the floor could be, uh-oh for Henry, turning into a box. 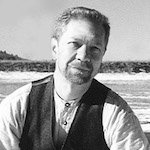 Charles Springer has degrees in anthropology and is an award-winning painter. A Pushcart Prize nominee, he has published in over sixty journals including The Cincinnati Review, Faultline, Windsor Review, Packingtown Review, Gertrude, and Passager. His collection of poems entitled Juice is forthcoming from Regal House Publishing. He writes from Pennsylvania.