A once resplendent roan
lying on its side, legs flailing,
as if it thought—
as if, in its final moment
it could think at all—
that it was still running,
wild and free.

So disdainful, so high-spirited,
breathing patrician defiance
with its last sad wisps of breath…

Could it have known that its kind master
whose gentle sweetness I,
a fourteen-year-old city boy,
once had longed to emulate,
had sought only to tame its wilder excesses,

crashing the wooden club down
on the very top of its skull,
to oppose the highest point
on the arc of its insubordinate leap?

Across an immense span of memory
I reached out and stroked its mane,
and as it nuzzled my soft, healing hand
I reassembled the shards of its skull,

and its legs stopped flailing,
gathering themselves
with unimaginable intention,
and it sprang up in the green meadow,
sprang up and bounded away. 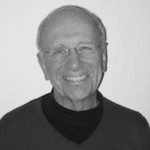 A graduate of Harvard College in 1956 and Yale Medical School in 1960, Victor Altshul has been practicing psychiatry in New Haven, Connecticut for more than fifty years. He has been writing poetry since 2012. His fourth collection, Strange Birds, will be published by Antrim House Books in the spring of 2019.