“I seem to have become an outrage addict,” I say to a young man at the gym. I’ve just glanced at the TV screens mounted on the wall in front of the aerobic equipment. As usual, CNN is in full eek mode, and so—like one of Pavlov’s well-conditioned dogs—I am eeking away.

The young man is tall, thirty-ish, with dark, curly, blunt-cut hair. I am tall, seventy-one, with long, greying, ash-brown hair that stays permanently ahoo. We are both serious weight-lifters, albeit his free weights are a lot heavier than my Cybex stacks.

“I gave up paying any attention to the news for Lent,” he says.

I am rarely astonished anymore, but I am astonished now. “Really? You were able to cold-turkey stop keeping up with what’s going on in the world—now!?”

Now! is my private code for “with Trump in the White House!!!”

He shrugs. He smiles. “Well I stopped for Lent. I’ve eased back into it some.”

I try to imagine waking up, grabbing my coffee, and not firing up my computer in order to check a few reputable, well-sourced news sites. Even imagining this makes me anxious. I glance up at the TVs again. BREAKING NEWS! scrolls across the screen beneath Donald Trump. Ah yes! A comforting hit of outrage. My anxiety dissolves.

My curiosity about the young man’s self-imposed sequestration from the news returns, however. “How did you feel not keeping up with what’s going on in the world for the whole forty-six days of Lent?”

He shrugs again. “A lot calmer.”

“Really? You weren’t worried? Or anxious?

Good question. “That something might happen, and you wouldn’t know about it?”

The young man does me the courtesy of considering my question seriously. He takes a few before answering. “It seems arrogant to me,” he says, “to think that my knowing or not knowing when something happens makes any difference.”

Again, I am astonished. This time, because he’s right. My feeling that I must stay up-to-date so I can blab my “informed” opinions all over social media is arrogance. Plain and simple self-importance. The people who really know me—my real friends as opposed to my e-friends—already know what I think.

“Besides,” the young man adds, “staying up-to-date on the news keeps me pretty freaked out.”

Freaked out…Might that be a good way to describe the reaction that’s dependably triggered in me by CNN’s constantly “breaking news?” We’ve circled back to the start of our conversation—to my casual comment that I might have become an outrage addict. “I need to think about this,” I say to the young man. “Could we talk later?”

We separate. I climb up on the vertical leg raise station to work on my abs of steel. The young man goes off to lean on a padded weight bench, work on his deltoids and trapezii.

I gave up paying any attention to the news for Lent…

I still cannot imagine doing this without a frisson of what feels suspiciously like withdrawal. Which is something I know quite a bit about since I’m an alcoholic. Sure, I’ve been in recovery for over two-and-a-half decades, but I never kid myself: My drinking may be in remission, but my romance with self-destructive, addictive behavior is not.

Historically, these behaviors have had a pattern:

Diet sodas come to mind. I drank them in moderation for years until drinking them began to trigger feelings of guilt. After which my consumption escalated ridiculously. And when I gave them up, what I really missed were those dependable surges of guilt.

The young man in the gym has begun doing something impressive with a heavily laden barbell. I walk over and wait for him to finish. He smiles at me, so I assume it’s okay to jump back into our earlier conversation. “I’m in long-term recovery from alcohol,” I say. “I’m not sure I was physically addicted, but I was certainly psychologically dependent. I had a lot of anger in my head left over from my childhood, and I think I mostly drank to escalate that anger. Perhaps to purge it or something, but whatever the reason was behind it, drinking made me act it out in ways that made me feel even worse.”

The young man appears to be thinking again. He obviously has made it a habit to think before he speaks. I, on the other hand, am a splatter: If I think it, out it comes. His thinking done, he nods and says, “Makes sense to me. After all, addiction happens when you know the feeling you want, you know the behavior that will generate it, and so you engage in that behavior.”

“But it wasn’t good feelings I drank to generate,” I say. “It was bad feelings.”

This gets yet another shrug. This time, an amused one. “Like outrage?”

Yes indeedy! I think. One thousand, million, trillion percent like outrage! I glance up at CNN again. Pundits are now pontificating. They, too, seem outraged. I look around at our fellow gym rats. Almost all of them who are not actively engaged in working out are checking their phones and scowling or eying CNN and scowling.

Is outrage becoming America’s trending drug of choice? Have opioids and oxy become so last year?

A vision of a caged hamster constantly running on a wheel pops into my head. 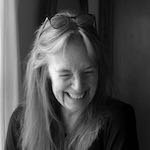