Morning hunkered over the house, gray and unyielding, pressing through the spaces between the drawn shade and the window frame. Wes sat on the edge of the bed in underwear and socks, next to a newly cleaned and pressed suit, still in dry-cleaner’s plastic. The only other furniture a three-drawer dresser and two nightstands of unfinished pine. His closet door stood half-open, exposing the dimly lit shelves and the t-shirts, sweaters and pants piled upon them. In searching for a belt, he had noticed a bright blue fold of fabric slumping over the shelf at the bottom of the pile of t-shirts, like a toddler peeking out from behind a chair, hoping to be seen and not seen.

Wes thumbed the fabric of the blue t-shirt, the kind of thing they make in kindergarten, he figured, so she must’ve been five. Couldn’t have been older than that. It might have been Father’s Day, maybe Christmas, he didn’t recall.

Nora had been telling him to clean out his closet, get rid of stuff he never wears. “If you haven’t worn it in three years, you’re not gonna wear it! Get rid of it!” He could still hear the exclamation marks.

He ran his thumb over the raised swirls and solid pools of shiny fabric paint. Bright, primary colors that stiffened the fabric. She had laid on the paint with all the delicacy and glee of a five-year-old wielding something irresistibly viscous—so thick that, if he folded the shirt the wrong way, the paint would crack, leaving gaps in the meandering rivulets and pools. He was careful not to; maybe that’s why he had never worn it. A big puddle of little-kids-playroom-yellow coagulated at the right breast. Below that, swirls of red, green, blue. The random drips of childhood. If you looked hard enough you could see things—parts of faces, bodies—something he had noticed long ago but had stopped looking for. He held it up to his nose and it smelled like Play-Doh, like warm pancakes, like clean socks.

About a year after he got the shirt, Wes and her mother separated, and he saw her less and less. One day, he thought it was the day he told her she was finally big enough to order the large pizza at Mike’s, she asked Wes if he ever wore the shirt. He just said that he didn’t want to ruin it, it was so special. She said, “You still have it, don’t you?” Wes nodded and gave her a quarter to put in the jukebox and play whatever song she wanted to. He had tried to make their outings fun, the little time they had together. When she was a little older, she started to ask questions, like why he left, why he was mean to her mother, and—this is the one that almost made him laugh—if his girlfriend was going to get all his money. Wes would shrug, say something like, “It’s complicated,” and try to get her mind off of what children just couldn’t understand. Until the day—she was 14, maybe—she slammed the door and yelled at him that he just didn’t understand. She never did apologize. After that, no note, no birthday card, no Father’s Day card, no Season’s Greetings with her picture. He looked at the suit. There was still time to back out.

When the invitation arrived in the mail, Wes threw it into the trash without a second thought. He and Nora never got mail with that kind of fancy envelope with that deep, black, curvy script. He assumed it was just someone else trying to scam them. But Nora said, “Wait,” and took the envelope and opened it. Nora said they were going and that was that. Nora didn’t care that she had never met her, or the guy she was marrying, for that matter. Family was family, and if they didn’t want us there, they wouldn’t have bothered to put all those pink and white and frilly and fancy pieces of paper into that thick envelope and send it to us. She said Wes would need a new suit and they would find a way to afford it.

After the move—after the fire, after the dog ran away, after salvaging what they could and storing it in a few boxes for several months—the shirt sort of got lost. Until, one day, when he was opening a box of kitchen stuff, he found it wrapped around a delicate glass vase he had taken from his mother’s apartment after she died. He didn’t know why he had taken the vase. What would a 14-year-old boy, whose mother had left him, his father and his brothers, want with a glass vase? He certainly had no use for it. It was nothing that he could show off to his friends. Maybe because there was no use to it, so it would never get used up. He tossed the shirt aside and carefully placed the vase in the china cabinet.

Wes rubbed his finger on the smooth yellow pond. He remembered taking her ice-skating when she was 10. She pleaded with him to lace up a pair and, after trying to joke his way out of it, he gave in and got on the ice. She took his hand when he started to wobble and sang out loud the song blaring on the PA system. He laughed and started singing a duet with her. Then he delicately put his hand on her waist and danced with her the way his mother had taught him, when she told him to step on her shoes and she carried him around the room to a Benny Goodman tune.

Nora stood in the doorway. “You getting ready?” She looked at the shirt and then at Wes. “Better get that suit on. We got to leave in 10 minutes.” Wes nodded and stood. In his stocking feet he towered over Nora and the breadth of his shoulders looked like they could envelop Nora and hide her from the world. He, on the other hand, would have a hard time being invisible. Nora turned and walked out. “Ten minutes!”

When Wes emerged from the bedroom, Nora was in the kitchen drinking coffee. Without looking up, she began, “Can I pour you a quick…” and stopped.

“You’re wearing that!? To your daughter’s wedding?”

Wes bent his neck to look at the shirt draping the broad expanse of his chest, like an enormous billboard. “What else should I save it for?” 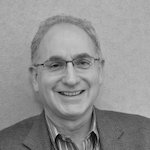 E.H. Jacobs is a psychologist and writer based in Massachusetts and New Hampshire. His work has appeared in Smoky Quartz and Aji Magazine. He has also participated in two fiction workshops with The Kenyon Review. He has published two books on parenting, professional papers in psychology, and articles for the general public on psychological topics, and he has been a contributing book review editor for the American Journal of Psychotherapy. He has served on the clinical faculty of Harvard Medical School.