In Alice Sebold’s book Lucky, a memoir of her brutal rape as a college freshman, a policeman tells her she was lucky. He meant she was fortunate to have been raped and beaten rather than being raped and murdered. I was lucky too—luckier than Alice Sebold in that I’d never been raped despite taking risks in my teen years and twenties—hitchhiking, getting shit-faced drunk in bars, inviting men I barely knew into my home. And then at thirty, I’d been hired as a correctional officer—prison guard—at San Quentin, the infamous men’s maximum-security prison.

Working at San Quentin I’d been lucky—despite being kidnapped at gunpoint while taking a prisoner to a community medical appointment, certain I’d be raped and murdered. Fortunately, the prisoner and his shotgun-toting homeboy were more interested in escape than rape. Apprehended during an out-of-state robbery spree, the two ended up back in Marin County jail, awaiting trial. The gunman offered $1,500 to have me eliminated. Expecting a hired killer to jump out from behind a dumpster or bush, I had a bad case of PTSD for months and woke up with night terrors. My mouth broke out in sores and my live-in boyfriend’s parents sent bad vibes my way since their dear son might get shot too. Eventually, the case was dropped.

Still, there were the daily stabbings, riots, ambulances screeching through the prison’s East Gate to speed another victim off to Marin General ER, the county coroner coming for those who didn’t make it. Staff were assaulted and murdered too. Rape was an ever-present danger for women.

Nola, a female officer, had walked into the prison hospital’s staff toilet when an inmate, who’d hidden behind the door, shoved her against the wall with one hand, slamming the exit door closed with the other.

“Couldn’t grab my whistle ’cause I was too busy fighting him off,” she’d told me later.

Sounded to me like Nola was a total badass. Prison gossip had claimed she’d pulverized the inmate—“beat the crap out of him,” one officer crowed. The reality was different.

Voice quavering, Nola recounted the attack as if it had just happened. “Thought he’d kill me…”

Memories of my kidnapping made my gut lurch.

“Kept trying to get my baton free.” Nola took a short, ragged breath. “Fought for what seemed like hours—probably just minutes though.”

“How’d you get away?” Curiosity gnawed at me. Awe, too. Could I have held off a rapist like Nola had?

“I’d been yelling. But by then both of us were out of breath.”

“Hadn’t anyone heard the noise?” The chief physician’s office was just across the hall.

“Guess not. But then a doctor unlocked the door from the outside.”

Neither of us said the word lucky. But if someone hadn’t finally opened the door, what would’ve happened?

Alice Sebold fought too. Yet there was no passerby to come to her aid.

Being cornered in an isolated area was hazardous. Once a young blond prisoner surprised me as I rounded the far corner of West Block housing unit up on the third tier. The inmate had been lurking around, trying to touch me. A couple of days earlier, he’d reached out, brushing my thick Tuffy jacket with his pale hand, murmuring, “You had some lint there.”

“Keep your hands offa me,” I’d barked as other officers turned to stare.

Now it was just the two of us, alone on the deserted rear side of the tier. His eyes met mine as he quickened his pace.

Where was the gun-rail officer? He must’ve been covering another section of the cellblock. West Block, the prison’s semi-honor unit, was reserved for “good guy” inmates. I knew you couldn’t count on that. Last year, a prisoner on lifer’s row had been stabbed so many times that his blood surged past the cell door, marking the concrete walkway with the bright evidence of murder. Not long after, a female counselor was raped in her office, forced to the ground before she could sound the alarm, her assailant unconcerned that she would identify him later. I still remember her blood-drained face, her trembling hands as she sat in the courtroom during the preliminary hearing, eyes darting toward the inmate who’d attacked her, robbed her of confidence but not her determination. At least the counselor could name her rapist, unlike the female cook who’d been knocked out, dragged into a storage room, and gang-raped, later found bloodied and half conscious by a coworker.

I got lucky with the blond stalker. Glancing right, I’d rushed past him, sensing he’d be unlikely to seize me if I moved swiftly. The strategy worked.

After that, I’d pulled his central file—the stalker was in for attempted rape, kidnapping, and an assortment of lesser charges. He’d burst into a massage parlor, taken one of the women hostage at knifepoint, forced her into a vacant room, and attempted penetration but was unable to achieve an erection.

Statistics indicate that one out of six women will be the victim of rape or attempted rape in her lifetime. Would I end up as a victim too? I had friends who’d been raped.

Nellie and I were in our early thirties; we both worked at the prison, had become friends.

I’d been spilling details of an abusive relationship with my boyfriend Eric. “We were arguing. Then he slapped me.” Just like my dad did when I’d sassed him as a teen. Full across the face—the sting disappearing well before the shock faded. Mom blamed me, had said, “You shouldn’t have provoked your father.”

I stared out the window. “I don’t know why I stay with Eric.”

Nellie nodded, leaned forward. “I haven’t told anyone about this but…”

We didn’t normally share secrets. Was it about her boyfriend?

“Last year, before I met Maury, a neighbor came by.” She crossed her arms over her chest, shivering. “I was wearing a low-cut sundress. We were talking…sitting on the couch…” Nellie hesitated. “Then without saying a word, he picked me up, carried me to the bedroom, and had sex with me.”

Sex? I wanted to grab her shoulders and yell, “He raped you, for God’s sake.” Instead, I asked if the neighbor had been arrested, imagining him being dragged to a cop car in handcuffs.

“I was wearing a revealing dress. I guess he just couldn’t help himself.”

Why was Nellie buying into the myth of uncontrollable male lust—that she was at fault because of her outfit? Only later did I learn that many women never report “date rape” or a sexual assault by an acquaintance. Who’d believe it wasn’t consensual?

Even more surprising was what my friend Wendy told me. I’d just finished a street-fighting course for women—Model Mugging—where we’d learned to defend ourselves against a fully padded “assailant.” Wendy attended the graduation—each student was “attacked” and fought back to the loud cheers of our guests. “Hit him in the groin.” “Kick, keep kicking.”

Maybe I was too confident—thinking I was tough—could take on an assailant.

Wendy picked up on that. “Don’t be too sure. Sometimes it’s better not to fight.”

Wendy was big into the idea that we create our own reality, which included both the good and the bad. No matter what happened, how you thought about it made all the difference.

“Back when I was living alone in the outskirts of Tucson, I woke up one summer night to a man with a knife at my throat, telling me to keep quiet.” Wendy looked directly at me, her expression unreadable.

“Holy shit, what did you do?” This is not the reality anyone would want.

“Told him he didn’t need the knife. I’d do what he said.”

“And…” My stomach was churning.

“He said he didn’t want to hurt me. Got on top…Before he left, he’d told me not to leave my window open in the future. That’s how he got in.”

“How did you deal with being raped?” I wanted to know how this fit in with her philosophy.

“That wasn’t the only time I’d ever had lousy sex. I choose not to be a victim.”

Still struggling to regard rape as merely bad sex, I don’t even remember asking if she’d called the cops.

Now I was a cop of sorts, a prison guard. All I had to do was walk past the granite memorial by the entrance gate, the names of fallen staff etched into cold stone, to recognize the risk inherent in my job. Yet danger lurked in unexpected places.

Walking down McAllister for an evening performance at the San Francisco opera house, I saw three young men rounding the corner at a dead run, charging toward me. It was dark; no one else around. I thought about throwing my purse over the chain-link fence that lined the sidewalk, but that seemed foolish. It had my wallet. Could I make it back to my car? Too far. Planting my feet, I gripped my purse. One teen yanked the purse from my shoulder, shoving me to the ground. My head hit the concrete—hard. Another boy kicked at my head. They sprinted away, holding up my wallet like a trophy, laughing, fist bumping. My head throbbed, blood matting my hair and soaking my expensive wool outfit, my money and credit cards gone.

When I was ten, a pack of neighborhood boys had dragged me into an alley, pushing me into the weed-choked dirt, kicking and punching. I didn’t even know them, had done nothing to cause the attack. They were too young to try rape. Some people might say I was lucky.

After I’d returned to my job as a counselor in the prison’s mental health department, I told my boss and a few of my coworkers—psychiatrists and psychologists—about the mugging. Expecting some therapeutic empathy or compassionate listening, instead I was verbally assaulted. One psychiatrist asked, “Why did you go to San Francisco?” as if I’d trotted into a war zone with no regard for my safety.

I shook my head. “I was going to see LaTraviata.” Another doctor had invited me to the opera, said he’d meet me in the lobby. Warned me not to park in the Civic Center garage, where a couple had been robbed at gunpoint last week.

The psychiatrist frowned. “You should’ve shot them.”

Like Bernhard Goetz, the subway vigilante? I glared at him. “With what?”

“You mean you weren’t carrying a gun? I always carry.”

Why was this my fault?

When I told my ex-husband, he’d said, “You were lucky they were only after your purse. They could’ve raped you.”

The undercurrent of vulnerability, the likelihood of rape is part of the script for women. Too often, blame is the background music. 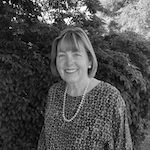 Christine Holmstrom often wondered what made her go to work as a guard at San Quentin, the notorious men’s maximum-security prison. The upside—it gave her lots of great material to write about. After surviving riots, an armed escape and a death threat, Christine finally had the good sense to retire and is now working on a memoir about her prison years.