One short-haired, German Rex single-owner cat about one year-old, up-to-date on shots, I think, although Mom got a little lax toward the end.

Listen up, buyers: This is a great, sweet cat with a spicy character. Shut in a small, Vegas apartment with my mom since its birth, the cat retains a distinctive, sophisticated look even after hiding for two weeks in my mom’s closet under a pile of dirty laundry, next to an eight-foot high stack of sci-fi and fantasy novels in large print, and a box of fancy bingo daubers.

(A side note to bingo lovers: You won’t be disappointed by my other eBay offering. Since her illness, my mom had acquired quite a bingo habit, according to her nursing assistant. My brother reminds me they don’t use those little discs anymore to cover up the bingo numbers; they’ve got markers that you stab your bingo card with—and that’s what my mom had collected over the years—75 of them, all different colors. Please refer to Bright Bingo Paints by Seller 774—just make me an offer). You will have good luck with these sweet bingo daubers. They brought my mom plenty of jackpots and the money to buy a pure breed German Rex kitten.

Pay no attention to Wikipedia, which says Rex is a cat breed resulting from mutation. You might be tempted to think he’s a mutation when you look at little Rex’s picture, below. Yes, he appears cross-eyed, but it does not affect his vision. He can easily distinguish my mother’s rubber exercise bands from power cords and plug-ins. He prefers power cords and plug-ins; so, P90x fans, your exercise bands are safe, and he will enjoy watching you do arm curls while respecting any rehabilitation equipment you might have. My mom’s wheelchair has no teeth marks on the wheels or rubber armrests. You won’t be disappointed by this offering (See my other auction, Mama’s Sweet Wheels by Seller 774. Just make me an offer).

You will like this cat. In fact, you won’t even know German Rex is there half the time. My mom didn’t when she wheeled over his tale and left it crooked! My brother and I hadn’t wanted her to get this cat, especially since we thought her big bingo jackpot would go to us rather than toward a German Rex mutation. I never told her that, though.

After her two-week hospice stay, my brother and I spent two days wrangling little Rex out of that corner of my mother’s closet. Wrangling little Rex was such an ordeal that it took my mind off mom’s death. I’ll tell you what, a cute little cat like Rex can be a real asshole when you get it cornered and try to drag it out of a closet, but that kind of temperament could come in handy for your home invasion worries.

Little Rex is declawed, which we learned when his back legs made four clean nail stripes up my brother’s forearms while the soft pads of his front paws patted my brother’s cheeks without a scratch. We learned Little Rex’s fondness for power-cords the hard way. The vet said Rex was trying to commit suicide, but Rex is on anti-depressants now, and without that power cord habit, those pretty blue eyes wouldn’t be crossed and wouldn’t stare at you with that glassy, faraway look.

I know my brother and I enjoyed his comforting, cross-eyed stare after two bottles of wine the night we came home from hospice. I think all three of us were remembering the time at the bingo Parlor last year on mom’s birthday. We’d bought her a real nice red sweater and she threw it across the bingo table into another lady’s ashtray because I’d brought the blue dauber instead of the purple one. Rex jumped out of the knitting/bingo bag where he’d been hiding and the man calling the numbers threw his green Converse sneaker at Rex’s head.

You know, now that I think about it, you should really make sure you are ready for the responsibility of a cat before you make a serious bid for Rex. I want to be sure he goes to a good home and that you don’t start throwing shoes at him if he falls back into his power cord-chewing habit. To get approval to bid on Rex, send a few pictures of your house. Pictures of any other animals you have too, and a description of the treats you buy, because Rex likes rolled cheese and turkey, which helps him take his anti-depressants, and he really loves playing with his musical rolly-ball. It’s noisy and annoying, but you can get used to a lot of things if you’re willing. 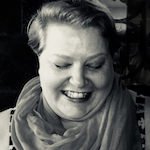 K.E. Ogden is the 2019 recipient of the Cal State LA Henri Coulette poetry prize sponsored by the Academy of American Poetry and a 2019 poetry fellowship from the Center for Contemporary Poetry and Poetics at Cal State LA. She is a former judge for the Flannery O’Connor Short Fiction prize and a poet laureate of Gambier, Ohio. Her work has been published in Brevity, Kenyon Review Online, Louisiana Literature, Zone 3, and she has work forthcoming in Crab Fat magazine. She teaches each summer in the young writers program for the Kenyon Review. Find her on the web at kirstenogden.com.