Not long ago, I walked along a rustic road that wound its way through a thickly forested area, taking in the sounds and sights of nature. Eventually the growth of trees thinned out and I came upon a somewhat ramshackle building situated behind a gravel parking lot. There I stopped, as if waking from a trance. Just a short time before, I’d been strolling in a neighborhood of stately, craftsman homes that were built during the time when Tacoma was first being settled in the late 1800s. From there, however, I must‘ve followed a road that branched off into the greenbelt zone.

Out of curiosity, I peered through a high wrought iron fence extending out from the building along the road and saw a series of gravestones interspersed around the landscaped grounds. The plots and gravestones looked to be very old, which piqued my interest even more. In fact, there seemed to be a kind of hidden and undiscovered allure emanating from the entire premises of the old cemetery. This made me want to go inside and explore the place, but I decided against it because I didn’t want to be late my destination, the Broadway Farmers Market. Maybe I’d have the time to visit it on the way back.

An old man walking a German Shepherd trudged toward me. He was well-dressed in dark attire but had a long, unkempt white beard, stringy hair, and his oversize sunglasses accentuated a rather pallid complexion. I nodded as we passed, which caused the dog to growl and lunge toward me. He jerked the leash and continued on without any kind of response, staring straight ahead as if I wasn’t there. I turned and watched him until he walked through the gate and into the cemetery.

Normally, these kind of silent rebukes never bother me, but for some reason this time it did. It seemed to trigger a disturbing unease that lingered on during most of the walk, until I came upon the hubbub of traffic and crowds of people in the downtown area.

I stopped briefly at the B-Sharp Coffeehouse a few blocks from the Market, ordered an Americano, plopped down on a sofa and perused the Tacoma Weekly to catch up on the local news and arts scene. The four-mile walk from my place took longer than expected, but at least it gave me chance to check out other neighborhoods in the area for the first time since I moved to the city earlier in the year. I knew the B-Sharp was my kind of place when I first went inside because of its rough brick walls, high-beamed ceilings, subdued area-lighting, and eclectic wall art. Since then, I’ve been there for the open-mics, live jazz performances, and just to kick back with my laptop in a private corner to do a little writing.

I stepped out of the coffeehouse and headed south along the narrow Opera Alley, passing by a small trendy restaurant, a yoga studio, walls of colorful, creative graffiti art, and various warehouse and apartment buildings. The alley merged into the tree-lined St. Helens Avenue, which contained a hodgepodge of more little businesses: a guitar shop, a clothing boutique, a gay nightclub, an antique mall, a couple of small cafes, a vapory lounge, a tattoo parlor, a candy store, and a donut house.

As I stood on the corner of 9th Avenue and St. Helens waiting for a light, I noticed a crowd of people at the north end of the Farmers Market a half-block away. Across the street, the Pantages Theater stood out prominently from the adjacent buildings. Built around the turn of the century, the architects modeled it after the great East Coast and European opera houses. Now the city used it as a performance center for a variety of artistic and musical venues. Just up a block up along the steep 9th Avenue grade was the Rialto Theater, another historic building which also hosted performance and cultural events.

I realized now that I was probably standing near the heart and soul of old Tacoma, with those two impressive buildings symbolizing a past when the founders dubbed it “The City Of Destiny” in the late 1800s because of its status as a major railroad hub, shipping port, and the many jobs coming from the booming lumber and fishing industries. Those jobs started going away in the 1960s, and by the late-1990s Tacoma resembled a rust-belt town with all the abandoned houses and businesses, combined with a rampant meth activity, a high murder rate, and other modes of mayhem. In fact, a CNN poll conducted in 2004 ranked Tacoma as the “most stressful” city in the nation because of those, and other, factors.

For decades, the most prominent landmark on the Tacoma skyline was the nearly six-hundred-foot tall Asarco copper smelter smokestack that stood on the northern edge of the city. The pungent, foul-smelling smoke emitted from the smokestack drifted for miles across the city, and beyond. In 1984, Bruce Springsteen performed a concert at the Tacoma Dome and afterwards called the city “the armpit of the nation.” The city demolished the smelter in 1993, but people in the region still associate Tacoma with that smell: ‘the aroma of Tacoma.’

The city slowly picked up as more people, like myself, started settling in from Seattle and other places, looking for a more affordable place to live. Since my short time here, I could feel a genuine pride and spirit from the people I’d became acquainted with, and from the vibrant activities that were going on, as promoted by a young and enlightened civic leadership. The city was definitely on the ups.

It was still during lunch hour when I walked through the market, so there were long lines at all the food trucks in the area. The smoky aroma of tacos, lumpia, fish, curry, and burgers wafted through the air. I ended up buying a bunch of produce, a loaf of sourdough bread, a deep-dish apple pie, and a jar of barbeque sauce. I stopped to listen, and donate, to a couple of buskers, and watched a bluegrass group perform in an outdoor square.

On the way back along St. Helens Avenue, a young woman approached me walking a dog that looked like a Shepherd mix. At least this one didn’t snap at me as we passed, like that hellhound by the cemetery.

I poked my head into the venerable Doyle’s Pub to see if any soccer games were playing; all the screens were black. I was tempted to order a pint of Guinness, but knew it would lead to more and I still had an hour-plus walk back to my place.

Just west of there, I cut through Wright Park and strolled along trails which meandered around groves of ancient, giant trees of every shape and variety. I rested on a bench in the shade of an oak tree before starting the long trek home. I munched on some sugar peas bought at the market and gazed at the snow-capped spectre of Mount Rainier shimmering above a low layer of clouds on the southeast horizon. No matter what those hifalutin Seattle residents say about Tacoma, they sure as hell don’t have such a splendid view of that holy mountain. Rows of old apartment buildings and mansions lined the east side of the park, and the Tacoma General Hospital bordered the west side.

When I first moved in Tacoma, I thought it rather strange that I’d end up there—the city of my birth—after all the places I’d lived in and travelled to in my fifty-plus years of life. My father was a soldier at nearby Fort Lewis during my infant years, and shortly after that the army re-stationed him to Germany, where we lived until I was seven before moving back to the States. I graduated from college in the Bay Area, and worked for the next ten years on various newspapers in Portland, L.A. and New Orleans. During the breaks between jobs, I took long vacations to Europe, South America, and Asia. I married in my mid-thirties and settled down in the Seattle area for the next fifteen years, until the divorce.

And now here I was: sitting right next to the very hospital I was born in, and thinking that my life had come full circle in a way.

I took the same route home and stopped when I arrived at the narrow road that led down into the woodsy gulch where the cemetery resided. Once again, I began to feel that same kind unease as I had when walking to the market. Plus the clouds were becoming forbiddingly dark and I didn’t want to get caught in a downpour.

Perhaps I’d drop in there another time, on the way back to the city. 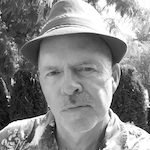 A.R. Bender is a writer of German heritage now living in Tacoma, Wash., USA. He’s completed two short story collections, a few of which have been published individually, multiple flash fiction pieces, and a smattering of poetry. He’s also seeking representation for his completed historical novel.