A brief apocalypse has taken possession of my person.
The streets are full of melancholy.

Yesterday I fell asleep on the bus.
The sound of someone crying woke me.

Was it the woman slumped in her seat like a bag of laundry
or my mother forty years ago, the night Elvis died
and I held her hand as she trembled at the kitchen table?

In The Times this morning a story about Chopin’s heart,
found, submerged in a brown liquid thought to be cognac.

On his deathbed Chopin asked that his heart be cut out
and returned to his beloved Warsaw.

Imagine if our own hearts could be extracted and one day discovered,
swaddled like unholy relics.

The first known depiction of the heart as a symbol of romantic love
was found in a 13th century French manuscript
where a kneeling lover offers his heart to a damsel.

In a tiny box marked “My Tragedy,” Chopin kept letters
from his lover, Marie d’Agoul, who refused to marry him
because of his lifelong ill-health.

Researchers found Chopin’s heart to be massively enlarged and floppy,
and covered in a white substance that gave it a “frosted” appearance.

In the dim glow of my apartment I listen to Elvis’ early recordings.
Obsessed with death, he visited funeral homes late at night to stare at the bodies.

A child prodigy and leading symbol in the Romantic era,
Chopin feared being buried alive. He often had vivid dreams
of damned creatures inside his piano.

Outside my window the sun has fallen behind the rooftops on Highland Avenue.
I feel blood pulse through my veins, feel my heart thump and flutter

like a trapped bird. Each night I cut it out and place it in a tiny box
under my bed, somewhere safe, lest I wake suddenly in the pitch dark
with only the dank earth for comfort.

THE HISTORY OF OUR VAGRANCIES

….. Out of Paris in Oneida,
in an ox driven sleigh to New Amsterdam,
….. across the frozen waters to a tiny creek-bed cabin
surrounded by sycamore and shale.

….. From the land of the Seneca, to Canadaway
and Chadwick’s Bay; from a man named Smith, to disaster
….. and resurrection, the war over salt and the Panic of ’37.

….. From the locomotive yards to the steel mills,
from a house divided, to the doctor will see you now.
….. The Masons, Unitarians, and Plutocrats. Garibaldi
and the candle maker. Migrant farm workers and grocers.

….. From Kid Sperry’s and Pop Tyrrel’s, to the Sacred Heart.
The Knights of Columbus and Maccabees, the Monies
….. and Black Community Club. From the Peanut Café
to the Family Dollar. Frontier town to vacant lot.

On sleepless nights we hear their song, their voices calling us back.

….. Allegheny Ludlum, Niagara Mohawk and Koch’s Brewery,
the tug boats and fisheries. Pesticides and the grape harvest.
….. King Neptune and the county fair.

….. From D-Day to Victory Day, Eisenhower and JFK,
to the false prophets of Urban Renewal. The Merchant’s Bank,
….. and the Friendly Kitchen. Spaghetti Sundays and the cancer ward.

Listen to their song, like a blast of wind from Ontario. Like the waves
that lap the beach.

….. Liverwurst, TV dinners, and grilled cheese. From
Love Me Tender to Ave Maria. Coffee in the morning and I pray
….. the Lord my soul to keep. Holy Thursday and the Fourth of July.
Like a rhythm that swells from the ground and shoots up into your boots.

….. Like cicadas in August. Like the song the dead sing,
or the cry of a newborn. Listen as they call to us—
….. like all our vagrancies, the history of our comings and goings,
the doubts that invade our greatest aspirations, and propel our return. 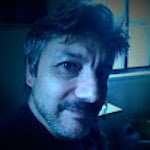 Jason Irwin is the author of A Blister of Stars (Low Ghost, 2016), Watering the Dead (Pavement Saw Press, 2008), winner of the Transcontinental Poetry Award, and the chapbooks Where You Are (Night Ballet Press, 2014), & Some Days It’s A Love Story (Slipstream Press, 2005). He has an MFA from Sarah Lawrence College. He lives in Pittsburgh and more of his work can be found on his site, https://jasonirwin.blogspot.com/.

One thought on “Chopin’s Heart and The History of Our Vagrancies, 2 poems by Jason Irwin”