This is a decades-long tradition and one of the only cold weather ballooning events in the nation—The Hot Air Affair. It can be fifteen or even thirty below, that’s no problem. But if there is snow or a hint of wind, the balloons are grounded and the disappointed spectators go to the parade, the bar or maybe the pancake breakfast instead. Today we are in luck but no one mentions this fact lest it be taken away by a sudden breeze. If you would ask any of us why we came, we would say for beauty’s sake . . . or for the children’s. We would never say—to feel something deeply, just for a moment—because it is too close to true.

Understand, we have seen nothing but dirty snow and dull tree branches for countless weeks. Only rarely a blue sky. We are ravenous for color, a hint of warmth. The raising of these balloons somehow means that spring will come, although, not soon enough. At the forty-fifth parallel, it’s never soon enough.

“There’s the monster,” I say pointing to a green pointy ear and menacing fang.

As far as balloons go, I prefer brightly colored squares or stripes to the elaborate shapes. But the green alien-monster both intrigues and repulses me. I wonder who sewed its pointy teeth, ears and horns and what a hot air balloon sewing machine would look like. It seems only Titan hands could have stitched this behemoth. My husband is frustrated. The streets are too narrow, the flame worshippers too many. We return home before the gas bags leave the earth.

Thirty minutes pass and we decide to try again. It is our fourteenth year in attendance and we have never witnessed what happens beyond lift-off, so we drive north out of town. Not long and there’s one, there’s another—flying high and fast. We round a bend to see dozens of inverted teardrops hanging in a periwinkle sky. Others swim in great swaths of golden orange. The cars, zoom lenses and binoculars are lined along the corn stubble fields. We park and join the cult of tiny eyes searching the morning sky. No one speaks. The glowing orbs exhale loudly as they soar toward us.

I swing around and snap a shot with my camera. There are five. Tails high, they leap first into sumac, then into thick oak—pursued, terrified. Directly in front of us, the green horned monster emerges through the branches in profile and dips low while crossing the tar road. The repulsion returns. Now I know him—he is winter. I am his imprisoned Persephone.

“It won’t even look at us,” my husband says.

We drive again, where we don’t know. Finally we stop by a slough and an old barn on a gravel road. We are alone except for the trophy buck who darts from its cover in the brush. Hungry and hunted, one more survivor. Now the sky relents and gives way to bright blue as seventy-foot-tall Rubber Ducky approaches us from over the horizon.

A mile further down, more houses and many cars. “Look, on the left,” my husband says. I can’t though. My gaze is fixed on the field to my right. A blue balloon with the zodiac and the face of the sun is landing in the stubble. Before our car comes to a complete stop I am out and running on crusted snow. The team on the ground is running too but they can’t wrangle the basket to the ground. I root for its escape and my heart tangles in on itself as I watch the sun and constellations rise again toward the sky. Moments later, the sun is defeated. My eyes are wet but not from the frigid air. I take this as a bad omen. Eight maybe twelve more weeks of winter.

Now four more balloons tumble from the sky and the brown and white field is dripping in electric blue, neon pinks, brilliant yellow, aqua and green. My hands are stiff, barely able to work the camera. The silken giants collapse to the ground slowly—silently.

I glance up and see the green alien has no intention of landing. I am angry. This winter monster may outlast the sun and stars but it cannot go untethered forever. It continues to float northbound alone. I run to the car already in gear.

We drive fast and blind, first east, then north, until we see the outline of ears and horns descending near Bass Lake. We miss the turn to the gravel road with the summer cabins and I clutch the armrest as my husband does a U-turn on the busy county road.

“Turkeys!” My husband says pointing to the chaos in the distance.

Turkeys. The symbol of sacrifice for renewal. Big toms and jakes, bobbing their heads and running wild, feet turning as if on wheels. Something must die to bring about something new and I am ready to pull a dagger if needed. But when we reach the expiring alien, our beautiful monster, its flame is already out. Lying on one ear it stares directly ahead. Still, it does not see us. But we see it—bleeding green into the frozen earth. 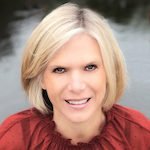 Amy Stonestrom’s essays have appeared in Brevity, Superstition Review, Defunkt, Storm Cellar Quarterly, Parhelion, and others. Her work recently received a prize from the National League of American Pen Women. Currently an MFA candidate in Bay Path University’s creative nonfiction program, Amy lives with her husband and son on the Minnesota-Wisconsin border. You can find her at amystonestrom.com.