For my grandmother, after her favorite song, Solamente una Vez.

You were never one for sitting down.
And long after it did not work out,
you showed who could wear the pants

better and built a house. Your hairdresser’s
eye arranged an enclosed patio
with a lemon tree as its centerpiece.

Is this the huerto in which your hope
glittered so many years later? A clock
of citrus suns by which to measure

his ill-timed return. And when the church bells
sing in the plaza, you will them to be
as faint as the serenade left in his wake.

HOW I REMEMBER “INTI” IS THE KICHWA WORD FOR SUN

When they came, they came to conquer,
not understanding the alloy found amongst

even the poorest of natives held a value
incomputable to foreign greed: the weight

of a soul; the sun’s blood congealed; an ounce
of the divine on Earth. I brought you on the winds,

your eyes thirsty for light, you came for your awe
to be conquered. I saw your beaming silhouette

balance between a cerulean sea gilded
by an equatorial sun and the world’s white sand end.

Your laughter my heliacal treasure brighter and more
abundant than what they could never find enough of. 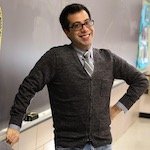 Eric Odynocki is a teacher and writer from New York. His work is often inspired by his experience as a first-generation American of Mexican, Ukrainian, and Jewish descent. Eric’s work has been published or is forthcoming in Green Mountains Review, [PANK], Magma Poetry, and others.