Learning the Names of Flowers

Each day, when my wife reaches inside
the mailbox,
her eyes catch on the bright morning
glories, whose vines have twirled up the post
with glad faces. Somehow they know, better
than she, her hidden will, that it’s for them
she settles a foot on every porch step,
one arm bearing the bluster of the bushes
before she lingers in her strides toward the street,
all the while maintaining an eye with irises
and white gardenias, so that I’m surprised
their spell has not swept her from our cares, drifted
her away on silky white sails. If she had,
who could blame her?
Or for falling sweetly
into the funnel of a daffodil, which will not trouble
to return her. For years, I’ve been off-balance
in such proximity—the up, up, of their flowering
whispers and her breathing down
to them, with me sometimes wandering off,
embarrassed, going for boredom, rather than
for her hand taking mine, inviting me to places
she has entered—alone—that soften her eyes,
stir her to sighs, so even the trees, long bystanders,
believe they are her own, and invite her to go
climbing. Oh! Let me not be an outcast,
but direct my love to see in me unfurling
of a flower, unleashing affection the heart squanders,
leaving us untaxed by our patchwork of worries.

As Close as They Can Whir to the Porch Light

without shriveling on the blistering bulb gather wispy,
threadlike souls,
summer-born,
which maybe have a body part
resembling a scratchy scarf
that has to be burned off.
Perhaps, though, through the frosty bulb they perceive
in the collaboration of tungsten
and terminals, of glass mount
and filament
their own fuzzy shape—
an imprint which keeps these god seekers
desperate
to enter the glass, thrum
as one with that illumined wonder.
They flutter up
desperate affairs—these roamers toward
the light, flickers of emotion,
threadbare entries in the great lexicon
of chaffy flyers.
When they skitter close to the bulb, their bodies arcing
toward that tungsten, which meets them
with arcing of its own,
it seems a fault in design
to fight toward the aura
inside the glass, where they silver up close
as they can—
every thought too big for them—
but working up the nerve to knock. 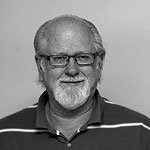 The poet laureate of Grand Rapids, Mich. from 2007-2010, Rodney Torreson’s third full-length collection of poetry, THE JUKEBOX WAS THE JURY OF THEIR LOVE, was issued by Finishing Line Press in September 2019. In addition, Torreson has new poems that recently appeared or will soon appear in ARTFUL DODGE, HAMILTON STONE REVIEW, MIRAMAR, NORTH DAKOTA REVIEW, POET LORE, SEEMS and TAR RIVER POETRY.