Our dinner ends with watching Portrait
Artist of the Year. For Adele likeness is all,
while I focus on the how of its attainment.

Beginnings proliferate and lead on to
ever more various results. Yellow ochre
ground and raw ochre outline of head

and face; detailed sketches in pencil;
a renaissance grid filled in from a polite
iPad closeup. After the basics, most

build slowly. I admire the painterly souls
who stand back for each stroke, loading
the brush then contemplating placement

for long moments before leaning in with
deliberateness and intention not mine.
Some are quick to layer in shadow

and light then spend what’s left
of the allotted four hours in a trudge
of adjustment. Judges meander among

the easels, peer at progress, opine as softly
as golf announcers how it’s going artist
by artist. Commonly, they comment on

whether the willow wisp of likeness
has been caught. Everything turns on
whether the undefinable essence has been

lost or found. The ones who win (one
must) can bump against it with just a few
of the myriad marks brought to bear

and others lose it just as easily. The hope is
that the flash of connection, the stroke that
sparks life is recognized before it fades.

I had two brothers-in-law,
handy guys, unlike me, with
handy guy jobs. They drove
pickup trucks with metal bins

up against the back of the cab,
locked because full of tools.
One built his own house,
a master carpenter. The other

a master electrician, who
could have built a house,
if he’d wanted to (I was his
boss’s, boss’s boss). When

we as sons-in-law got asked to do
a group job for the wives’ parents,
I with the least skills became
the go-fer, not even allowed

to perform the few tasks
I could handle, which made me
wonder if I was man enough.
I marvel how they never

needed to hire anything done.
Renovations, additions, they
just up and did them, nervy
with skills that substantiated,

made things manifest, unlike
my cerebral life; they provided
for shelter, above all but food
and clothes in the rank of needs.

Now and then I re-floor a deck
or build in a bookcase
as if I could be independent,
useful, if I wanted to. It took me

quite a while to get comfortable
with my role in the drama
of these things. They seemed
to tolerate me just fine,

but I’ve always wondered
what they really thought.
I’ll never know. When I
divorced her, I divorced them. 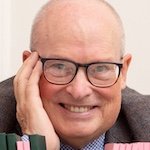 Arnie Yasinski is a retired college administrator, born American but now living in Ireland with his Irish wife. He’s a father and grandfather who holds a PhD in English and wrote his first poem at fifty. He has published poems in four dozen U.S. journals and recently had his first collection, called Proposition, published by 21st Century Renaissance in Ireland.