Mary, Mary, quite contrary . . . a splat from my Charlottesville restauranting days . . .

From the mid-1970s until the early 1980s, I co-owned a couple of Charlottesville restaurants with my second ex-husband. I was an accidental restauranteur. Second-ex had dropped out of law school one course short of a degree because he couldn’t bear the idea of being a lawyer. He had no idea what to do next and was understandably depressed. He knew the business side of restaurants from working in them during college and law school. I loved to cook. Why not open a restaurant? Surely it would be a splendid way for second-ex to restart his life.

Martha’s Café was in an old, upright, bright blue house on a dead-end lane about a block from the UVA Rotunda. Our staff was a tightknit bunch of students and artsy types who tended to keep working there until they finished their degrees or blew town for other reasons.

I loved being part of the Café. I loved feeding people, watching them scarf down a special I’d invented, or improve their mood with a piece of my chocolate-coconut pie. I was a hippie at heart—still am, I suppose—and, for me, that little restaurant beat with a hippie heart. Peace and love and a lot of dancing in the kitchen.

Contrary Mary was from Atlanta. Her mother had plans for her to “come out”—as a debutante, not as a lesbian—so she could be safely married off within her own social class and begin producing a few little debutantes of her own. Mary, however, escaped her mother’s tentacles by heading north to the University of Virginia. She began working at the Café as a server her sophomore year at UVA.

Contrary Mary’s laugh took over her entire being. I found her impossible not to both love and cheer for. As I think did most people.

During warm weather, after lunch rush, we Emps—meaning Café employees as opposed to the Peeps who were the Café’s customers—helped ourselves to whatever food was left and took our plates out on the Café’s front porch. We’d sit and eat and enjoy getting off our feet almost as much as we enjoyed each other’s company.

What had those rascally Peeps gotten up to today?

One afternoon, during the post-lunch-rush gab fest, Mary perched herself on the Café’s front porch railing. Someone told a particularly amusing Peep-dote that made her laugh so hard she tipped over backwards into the Café boxwoods. Whoops! Ass over teakettle—no more Mary. She immediately popped up, unhurt and unembarrassed. The rest of us cheered.

Mary bowed as I remember it.

Her version, perhaps, of the debutante curtsey she would never make . . .

When Vinegar Hill Theater opened in 1976, second-ex and I invited the Café staff to take in Casa Blanca—popcorn included. The theater was packed.

We Caférs took up almost a whole row close to the back. Mary sat a couple of seats from me, as obviously all-into the story as she was into life. The Nazis came and went; Bergman and Bogart flew together and flew dutifully apart; Bergman’s husband, Paul Henreid, did his brave and noble thing as a member of the Czech resistance; Peter Lorre simpered; Dooley Wilson sang in his great, gravelly voice. And then Bogart, Bergman and Henreid were at the airport, the latter two poised to escape the Nazis who were bearing down for good this time. Bogart and Bergman filled the screen, saying goodbye. And saying goodbye again. And again. While the camera cut back and forth to the revving plane and the onrushing Nazis.

The tension in Vinegar Hill Theater was palpable. As it is anywhere, anytime, during the closing moments of the Casa Blanca experience.

It was all too much for Mary. She sprang out of her seat, raised both fists in the air, and shouted, “Get on the damn plane!!!!”

Contrary Mary stayed with us at the Café until she graduated and took off traveling. The last I heard, she was shacked up with a goatherd on a Greek island. 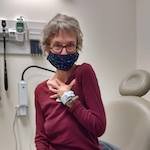 Martha Woodroof was born in the South, went to boarding school and college in New England, ran away to Texas for a while, then fetched up in Virginia. She has written for NPR, npr.org, Marketplace and Weekend America, and for the Virginia Foundation for Humanities Radio Feature Bureau. Her print essays have appeared in such newspapers as the New York Times, The Washington Post, and the San Francisco Chronicle. Small Blessings is her first—and so far, only—novel. She lives with her husband in the Shenandoah Valley. Their closest neighbors are cows. You can read more Martha splats at: https://www.facebook.com/Martha-Woodroofs-writer-page-200692333436533.