At dawn there are no residues left from last night’s shift.
I offer no sympathy to the crawling hours
of a newborn day.
With fog I travel across the city
to buy a large coffee with half-half cream,
a cinnamon raisin bagel toasted with cream cheese.
I always pictured Brazilian goddesses harvesting coffee beans,
cream collected from melted clouds underneath flying cows,
cinnamon a rebel swami fought in southern India,
raisin fostered in a local farm watered from Niagara Falls,
the homemade bagel is the pride of an old town,
the cream cheese has been a Dutch family wealth,
and the toaster is always heated with the red eyes
of a tired old lady behind the counter.
I adjust my grey ponytail towards the future
and join the queue. Happiness has always been
these few moments
when the bagel places the world under my teeth.
Now is time to toss coins on the counter.
I search for meaning in my jeans’ tiny pockets
But where are the damn coins?
“Sir, what would you like to have?”
shouts the old lady with red eyes.
I do not know what to say.
I never said before “I love you.”
In the old lady’s furious look
I see the same look in my mother’s eyes:
When I was seven she caught me
Playing with the little girl next door
Husband and wife.
I whisper sorry,
trespass my pride until I disappear.

He brings history from the closet,
wraps a blue bath towel around his neck as his cape
and holds a broomstick as his sword.
He is Robin Hood
and it is about time to set out his legacy in this house.
While peeing he plans the attack.
He does not wash his hands
because at war times
commanders-in-chief do not wash their hands.
He aligns his solders in the path
between the kitchen and the living room.
His plan is to reach the top kitchen cabinet before dinner.
The cookies are there!
His mother is still scrubbing the kitchen’s floor
of the ketchup stains he left behind at lunch.
His wet shoe marks would be easy to trace
over the new carpet
bringing on another fierce confrontation.
He would end up losing that battle
as even his father always does.
He still remembers the afternoon’s defeat.
Should he ask for help?
His sister was the one who snitched on him.
What about the kid next door?
He is too weak for such a battle.
After a long discussion with his top commanders
he retreats slowly to his camp.
His army rests in the gigantic box under the tiny bed.
He left his best solders hidden under the couch
to avoid the father’s gigantic feet
and the mother’s threat to throw them in the garbage bin.
He takes off his cape
and places the sword between his legs
convinced for the moment that

fear is a strategic move. 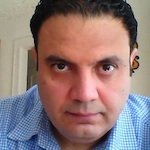 Khaled K.E.M. was born in Cairo, Egypt. He holds a PhD in Microbiology and Immunology from the University of Western Ontario, Canada. He lives in New York. He teaches biology, microbiology and genetics. He writes poetry in English, French, and Arabic. His first Arabic poetry book, El Foraq, was published in Egypt. Some of his poems written in French and English have appeared in magazines in Egypt, the US and Canada.