“Can u go to the parler with me today if u don’t have any plans?”

This text is from my friend Nighat, who is getting married today. I do not have plans; I have been wandering around Houston in the rain.

My Lyft driver pulls up to an immaculate house in the farthest exurbs of the city. The stylist, Shaireen, is a brisk Pakistani mom of three. Her eyes are the color of the sea just before a storm. She spreads white towels on her dining room table. She lays out pyramids of eye shadow palettes and an entire tool belt filled with brushes.

Nighat puts on her golden bridal costume, and the work begins. I sit with my elbows on the towels and listen as they reminisce about going on hajj: how the marble around the Kaaba stays miraculously cool on the hottest days, how kind people give you dates, how the jewelry stores are left unlocked during prayers, because no one steals in the holy city. Then they talk about how different things are in Karachi, where young women show their shoulders when they go out at night.

As the contour lines deepen, so does my unease.

I’m thinking about my dress.

Lying in Shaireen’s back bedroom is the gown Nighat gave me to wear to the wedding tonight.

It is sleeveless. It is cherry-red. It is see-through.

The bodice is mesh. Two bejeweled puffs cover my breasts. The midriff is more mesh. Below that is a very brief band of flowers. From mid-thigh, transparent netting cascades into a long, lacy train.

It is not inconspicuous.

“Am I going to have the most daring dress at your wedding?” I interrupt their conversation. I’m half joking and half terrified.

All this is true.

But my question goes unanswered.

Twelve years ago, I volunteered to become an ESL teacher. My motivation was selfish—I wanted to improve my Spanish.

In the two-hour training session, the instructor handed everyone a couple of textbooks and taught us mystifying exercises with little colored sticks. And then she said:

“I have a refugee from Afghanistan who just moved to Richmond. Is anyone interested in becoming her tutor?”

My hand shot up.

The first time I met Wasima, I wore a mini-skirt and a tank top. I was twenty-six; I was dumb. She wore a black hijab, a long black dress and pants, as she would every day after.

The ESL instructor told me to bring my wedding photos, to break the ice. So I showed Wasima pictures of my family, and of me in a slinky, sleeveless wedding dress. She smiled, politely, and she introduced me to her children. Nighat was just sixteen. Wasima offered me sugared tea, the first of a hundred cups. I brought out the flash cards. We began.

Back to the Houston beauty parlor. The bride’s transformation takes two hours. Then, Shaireen looks at me.

“I can do my own makeup,” I say. But my single BeautyBlender sponge, nicked where the dog chewed it, is no match for the forty brushes.

I shimmy into the scarlet dress, and I deliver myself into Shaireen’s hands.

A flurry of bristles, sponges, pencils. My face hurts from the assault. A nebula of colored dust settles on my contact lenses.

“Relax,” Shaireen says as she applies the glue for my lashes.

I concentrate on the hairpin in my hands. I feel the tiny knob at one end, the bend at the other.

I blink, I twitch. I realize my eyelids are glued shut. This is what happens to people who can’t relax.

When I am allowed to see a mirror, I am astonished. I send a selfie to Richmond.

All this is true.

When we arrive at the venue, I hold out hope that I might blend in. Surely some young cousin will be wearing a dress like mine.

But there’s not a shoulder to be seen in the Tempura Banquet Hall. Every one of the 150 guests is wearing traditional clothing, even the toddlers. Some women in the back have niqabs that cover their faces.

I feel like Bridget Jones, dressed for the Tarts and Vicars party.

Was I supposed to wear something under the dress? Spanx, a bodysuit, a slip? Did I still own a slip? Did anyone?

My mom—God bless moms—had given me a floral silk scarf, just in case. I drape it around my shoulders and clutch it for dear life. With my other hand, I tug down the butt-concealing flowers and hold up the train.

Wasima welcomes me with a long hug and a big smile. Sitting next to her, I feel reassured.

Then, a ten-year-old niece gives me a report from the field. “They were saying, ‘That’s the bride’s mother, and that’s the grandmother, but who is she?’”

“Tell them I’m a woman of mystery,” I instruct her. “Say no one knows who I am.”

This wedding is a serious affair. The bride and groom pose, unsmiling, upon a lavish dais. They’re legally married, but still strangers to each other. Everyone is just sitting around and talking, in Urdu and English.

“Is there going to be music later?” I ask Nighat’s younger brother.

No music, he says, with an apologetic shrug. “Their family is stricter than ours.”

Stricter? Dear Lord. I clutch the scarf tighter to cover my sideboob. I look at the beautiful tween girls, glittering like galaxies in their party clothes. One has the cutest flared violet pants. I covet those pants. I crave them.

Nighat’s brother sighs. “This wedding is so awkward,” he says.

I realize, then, that the bride’s family feels as out of place as I do. They are Afghan, not Pakistani. This is the walima ceremony, hosted by the groom’s side. It’s not their city, not their people, not their traditions. They’re just trying to get through the night, as I am.

And none of us is a stranger to awkward.

In the years I have known Wasima and her family, I’ve committed a hundred faux pas. I spilled tea on their fine carpet. I jabbered through the call to prayer. I refused food when they offered it. I offered food they could not eat.

Always, they responded with perfect grace, so that I never really felt I had done anything wrong.

I did learn. Slowly. And so did my student. For years, we wrestled with phonics and verbs and the pronunciation of “star-spangled banner.” Twice, she tried valiantly to pass the civics test for American citizenship, and failed. I had failed her. I gave up tutoring, and she moved to Texas, but we stayed friends.

Piece by piece, I heard her history. How the Taliban came for her husband one night, and she never saw him again. How she fled with her children, so little then, to Pakistan and India and finally the United States. Louisiana, then Virginia. They suffered here. The kids in Nighat’s first school kept asking her if she knew Osama Bin Laden, if he was her cousin.

Wasima gave me gifts from her homeland, bangles and embroidered shirts and beaded shoes. When I had my daughter, she asked a friend what Americans did when a baby was born. Bring chicken soup, was the advice. That soup was so saintly good. Six years later, I still wish I could have seconds.

The bride and her mother, her brothers, her sisters: They are my American family. They have welcomed me, fed me, forgiven me so many times.

I love them fiercely.

And in that love, in my inadequate dress, I let go of my embarrassment. It flutters to the floor, like a scarf.

I smile at everyone, from the dazzling tweens to their disapproving mothers. I pin up my train so people will quit stepping on it. I even climb the dais to pose for pictures with the bride and groom.

I have a good time.

Later, as I load my plate with palak paneer, I glimpse an intense-looking woman staring at me from the other side of the gleaming buffet. Her eyebrows are like knives.

I return her gaze, defiantly.

And then I realize: It’s my own reflection.

It’s only me. The awkward and beloved guest. 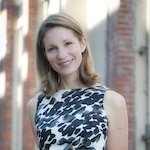 Melissa Scott Sinclair is a fiction writer and award-winning journalist. Her recent work has appeared in Parhelion, Richmond magazine and the anthology Life In 10 Minutes. Her short story Everything Must Go, a ghost story set in the decaying corporate headquarters of Circuit City, was published in the anthology Richmond Macabre.