Sheltering-in-place brought out the wannabe gardener in me, a long-time aspiration, with many attempts usually not ending well; these failures primarily attributed to over- or under-watering, usually the latter. I forget or get sidetracked with another endeavor or simply want to put watering off until tomorrow. In the heat of summer in the San Joaquin Valley of California, unless you desire heat stroke, watering should occur early or late, not in the hottest part of the day. I’ve been diligent so far, but as pandemic restrictions loosen and more activities fill our days, I can already foresee my watering resolve weakening, requiring focus, organization and discipline, three things I’m actually better at in some areas: writing or cooking, but not so good at in others: exercise, cleaning, and WATERING, which brings to mind the first line of an early poem: I used to dream of you face down in water . . .

My water broke while we watched Saturday Night Live on a warmer than usual September night. Because my first labor had lasted forever, neither of us took things too seriously—we finished watching the show, I remember feeling the cramping at regular intervals but then taking my time readying myself for the trip to the hospital. My husband stalled, too, figuring we had several hours ahead of us and why not spend them at home instead of in a sterile birthing room with other wailing soon-to-be mothers. We arrived at the hospital and the midwife announced I was dilated to nine and instructed me to start pushing. Making his entrance within minutes, he swam effortlessly through the tight squeeze of my birth canal, emerging all pink and beautiful at precisely 4:12 in the morning.

Ab-e-ru: a Farsi word I love, meaning literally, water of the face, somewhat akin to pride in English. When my husband and I divorced, I became concerned about preserving his ab-e-ru or saving face for him. I, for the most part, never spoke badly about him, certainly not to his friends and relatives, basically maintaining that it was “all me.” I did the same thing with my son. This was his dad and he loved him. So, I tried never to play the blame game, ever, especially to my son. I learned over time that the same ideal didn’t necessarily hold true for my son’s father, hearing I was a bad mother and he’d kicked me out. My son repeated to me things his dad told him, which I won’t reiterate here; though partially true, not something a small child should hear. No one seemed concerned about preserving my ab-e-ru, which I can’t help but think of as a very fragile thing—the water of my face. I do know my ab-e-ru became sturdier over time, maybe even brittle, out of necessity. Ancient history really, so I’m not sure why I still think of it. Actually, I do know. Of course, I know.

When I lecture about grief – about what it feels like to have someone arrive at the front door telling you your child is dead, I describe it like this:

Imagine being thrown into an icy cold ocean without a life raft, sharks circling. No help in sight. You’re so cold that every part of you is shaking and convulsing, and at the same time, you’re gasping for air. Now that I think about it, it bears some resemblance to late stages of labor and maybe it’s even like the horrid symptoms experienced by COVID-19 patients who have to be intubated. You’re panting and out of breath, in a pain hard to describe, only when it’s a labor pain and it eventually stops, there’s a new life to hold in your arms.

The house where I grew up was down a long dirt road with a driveway of deep sandy ruts. The closest body of water, the South Canadian River, raged or was dry as a bone, thin tributaries here and there, patches of quick sand, definitely not a place to swim. Maybe this is the reason I grew up afraid of water or at least water over my head. My mother paid for swimming lessons one summer at Elmwood, a public swimming pool in Oklahoma City. After the lessons ended, I still didn’t know how to swim, but had mastered dog-paddling and jumping off a diving board into water over my head. I never mastered treading water, though I’ve treaded water in other ways very well, even masterfully, furiously, you could say, all my life. I also discovered I have a unique body make-up that lends itself to floating. Body fat: the most wonderful floatation device. I learned if I find myself in water over my head, all I have to do is relax and my body will rise to the top, able to breathe again. Another life lesson.

I found his journals months after he was in the ground. He wrote using languages and dialects of despair, hopelessness. In one autobiographical piece during high school, he wrote about taking swim lessons as a young child. Mind you, in my recollection—he loved water and swam like a fish. Until I read the part of the story about the dreaded swim lessons and his fear (he underlined it in the story, calling it terror) of being thrown into the deep end to gather colorful plastic rings the instructor had deliberately thrown down to the bottom. Because his name was Alex, he was always first in line—first to be thrown in, which, of course, added to his anxiety. He writes how he could see me out of the corner of his eye watching with delight and excitement as he went head first into waters deeper than he was tall.

The nightmares began not long after he died. Without any resistance, I could see my own body floating at first, then submerging in slow motion, sinking downward into muddy, murky waters. At first it was a swimming pool. A few years later it morphed into a lake or river. Now, most of the time, it’s simply an expanse of ocean and amniotic, waters too deep to fathom or navigate. 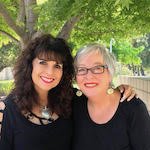 Armen Bacon is an op ed columnist and the author of three books: Griefland – An Intimate Portrait of Love, Loss and Unlikely Friendship, and My Name is Armen(Volumes I & II). Her essays have appeared in Maria Shriver’s Architects of Change, Entropy, Brevity Blog, Hybred Magazine, and The Fresno Bee. Follow her journey on Twitter: @ArmenBacon, Instagram: @ArmenBacon and Facebook.

Phyllis Brotherton, a memoirist and essayist, received her MFA in Creative Nonfiction from Fresno State University. Her work has appeared in Under the Gum Tree, Entropy, Anomaly, Essay Daily, Under the Sun, Brevity Blog, and elsewhere. She has received two Best of the Net nominations, the most recent for her essay, The Year of Assassination.

Phyllis Brotherton and Armen Bacon recently completed a collaborative book project, The Words Between Us, A Pandemic Abecedarius. This essay is selected from that project.