I can’t tell if it’s a naturally recurring feature of my post-mastectomy slog, or just another variation of my chronic struggle to feel relevant. Four weeks out from surgery I stare at my screen and write sentences, only to delete them seconds later.

“I decided that if I let a boy get me pregnant, I would kill myself before I’d ever tell my parents. I would have too.”

“Later I learned that there were problems in the Evangelical Women’s Caucus. By 1987 it had split up into two groups, each better reflecting the degree of biblical fundamentalism within their respective memberships (cite source).”

“I suspect if I cross-reference my journals, I can see more clearly the picture re-forming in my mind of this era of my life. Even so, I decide to stay focused for now on my old Bible; so singular an artifact and so foundational a measure of a life once lived and from which I am never completely free.”

“Like Mrs. Alving in Henrik Ibsen’s play, Ghosts, I too had only wanted to undo a single stitch, but found that when I had got that done, the whole garment came unraveled. In graduate school, one of my professors had put this principle more bluntly: ‘Kick a stone and the whole goddamn mountain falls down,’ he warned. Yes, that was it, after all. I had only been trying to live out my early adulthood according to the teachings of my church. I could not have been more earnest, more sincere. And yet there were these, well, issues. Small truths, really, but one realization leads to others and then others until there is nothing left of what you built your life on. The single stitch I pulled unraveled the whole cloth; the stone I kicked indeed brought down the mountain.”

One out of every four sentences or so makes it into my first draft. A complete paragraph, and I have to take the rest of the day off.

“I don’t remember who gave me the Stop ERA pamphlet. But I do recall how alarmed adults around me were about what no-good ‘libbers’ like Gloria Steinem and her ilk were up to. I was too young and cloistered then to understand the one item listed that became and continues to be the foremost issue to politically galvanize evangelicals:

“ERA will deprive state legislatures of all power to stop or regulate abortions at any time during pregnancy. ERA will give women a ‘constitutional’ right to abortion on demand.”

“Not much has changed in this monumental debate since the mid-1970s.

“The good country people of my church weren’t yet willing to talk explicitly about such delicate issues. Pamphlets were one thing; open discussion was another. But consensus was growing within our ranks. Morality was collapsing before our eyes. The cause was complex, but at least it was easy to spell: E.R.A. I grasped it all in simple, storied terms. Everything was in a mess because of Eve’s sin in the garden of Eden.”

Getting there? Decide tomorrow.

And I was gaining such momentum in the weeks before surgery. Even then, I had my doubts, but now doubts are almost all I have.

Real or Imagined Other: “You’re writing what?”

Me: “Well, mostly it’s a collection of essays that reflect my experiences having just missed Second Wave Feminism only to embrace it later once I lost my religion and got an education. And about how, in weird ways, the Bible is this thread that holds the whole story together somehow.”

So much simpler to call it a memoir. But that feels pretentious (checks thesaurus). Affected. Dare I say, presumptuous.

No matter what it’s called, I wonder who would read it? I’m an unknown, aging white woman. My social media accounts barely attract notice. A few “likes,” if I am lucky. But new followers? I don’t even have to check to see who they are anymore. Always a lonely looking man with one or two posts of himself in a tight shirt. Sometimes he sends me a clever DM. “helo”

I like to think I’m not really old. Just older. Depending on whose definition you go by, I’m either an old Gen-Xer or a young Baby Boomer. I unequivocally reject the latter. Regardless, I’m at that age where few people who pass me on the street or in the grocery store take much notice of me. Especially now with a mask on. To say nothing of my bulky-sweater, one-more-surgery-to-go awkward stage. I’m at that point where my idea seems somehow more germane coming from the mouth of the younger man in the meeting––hell, almost anyone else in the room––than when I said it two minutes earlier.

Still, in spite of everything, I’ve reached the place where I must reckon with the memories I’ve collected and carried around for years. They need to be unpacked, sorted, meted out. This one charitably given away to a good cause. Maybe a student. That one discarded in all its moldy ugliness never to be spoken of again. It’s just so hard to tell which is which sometimes.

But these. What to do with these? The time-tested lessons that sit unopened like letters in an abandoned PO box. The kept realizations of a woman whose life in most ways is not extraordinary, but in some ways is like nothing you could begin to imagine. The memories whose telling just might be the kind hand reaching through the shadows to pull you to safety, or at least into the light.

My stories of painfully gleaned wisdom and awakening identity only now seem ripe for telling––just when they least deserve a hearing. Not in comparison to those of people who have always been voiceless and invisible in a sexist, classist, racist, and in so many other ways exclusive world. Women and men whose time to be heard, I hope, has come at last. There are encouraging signs of this, and I rejoice to see them. But in the glowing light, the transformative beauty of these emergent narratives, my aging white woman stories and recollections seem especially trite. Tone deaf. Even to me. Devoid of the sensibility needed for this time. This terrible time of diseased bodies and of the body politic. This place so dark that my view of it is mostly obstructed, despite my best efforts to see beyond myself; beyond my own white hand waving in front of my face.

And yet I persist.

I take what courage I have on any given day from so many others before me who have dared to tell the Unimportant Tale. The one that adds texture and hue to our never-ending human saga. The wondrous, collectively woven tapestry that is our story of struggles and victories, of doubts and discoveries. A stitch-at-a-time full rendering of us all. Worn and frayed in places. Faded, on the whole. Exquisite against the odds.

And if I am so fortunate . . . tomorrow. Yes, maybe tomorrow, the words so agonizingly wrested from my unwieldy collection of memories will read like something worth saying. Worth sharing. Maybe even worth receiving. 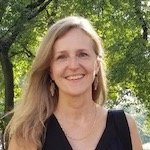 Angela J. Latham is a historian and theatre artist. She is the author of Posing a Threat (Wesleyan UP). Her essays and performance texts have appeared in Contrary, Theatre Journal, Text and Performance Quarterly, Liminalities, Performance Matters, and more. Angela is Professor of Theatre and Performance Studies and an Affiliated Faculty in the Gender and Sexuality Studies program at Governors State University in the Chicago area.