Boredom ricochets off the hard edge
of a freight train
carrying ethanol,
carrying the wanton thoughts of a man
gone too long without intimacy.
A secure living is a railroad job,
so you don’t upset the schedule
for a woman encountered in a bar
knowing it comes to nothing but
embarrassment and
a poor night’s sleep
and the shame of breakfast sandwiches
served in plastic.
Freeze the graffiti in time and it may tell a story.
The whistle sounds within a quarter-mile radius
of a public grade school crossing.
Two long wails,
one short,
one long.
This is the law
that keeps from killing children.

His wife,
by some miracle,
still desires him.
Has grown accustomed to the smell
of rotting
on him,
his willingness to touch
anything,
everywhere.
He cleaned the vomit
from the first baby –
always sick to her stomach –
unflinchingly, affectionately.
It was nothing to him.
It’s no mystery what he carries into this house.
Fungal spores on the bottoms of his shoes.
Yeasts incubating in the heat.
There is life in it.
The way his wife, children, two cats
have adjusted to him
is nothing short of starlings in formation.
They climb his body,
make a mountain of him
and he
is their prize. 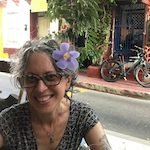 Christy Prahl is a philanthropy professional, foraging enthusiast, and occasional insomniac. Her recent work has appeared in Peatsmoke Journal, the Blue Mountain Review, Ghost City Review, High Shelf Press, Boston Literary Magazine, Bangalore Review, and others. She is at work on a chapbook, These Professions, which grows out of her fascination with American labor. She splits her time between Chicago and rural Michigan.